As promised/threatened in the previous post, here's a big collection of shots from our cruise vacation featuring the sillyheads. 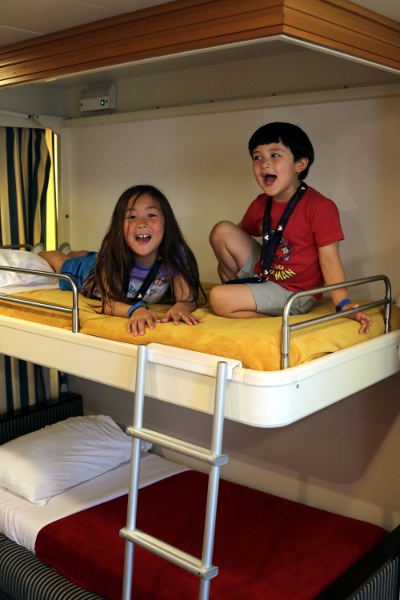 SteelyKid and The Pip like the bunk beds in the stateroom.

The sleeping arrangements in the stateroom were pretty slick. We had a double bed that was there all the time, and during the day a sitting area with a couch. While we were at dinner, the housekeeping staff came in and flipped the couch over to become a bed, then lowered a top bunk from a hatch in the ceiling. The kids have never slept in bunk beds before, so this was considered highly neat. 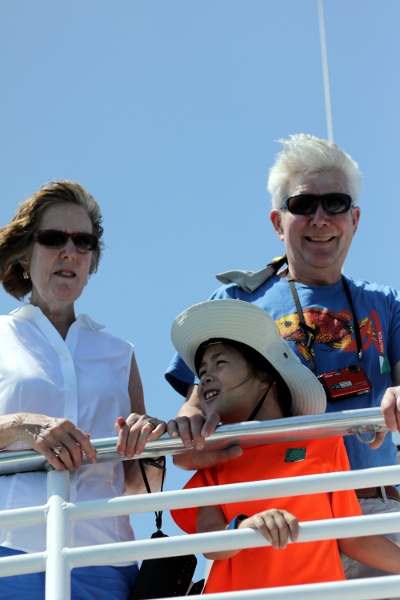 SteelyKid with my parents on the top deck during the glass-bottom boat ride. 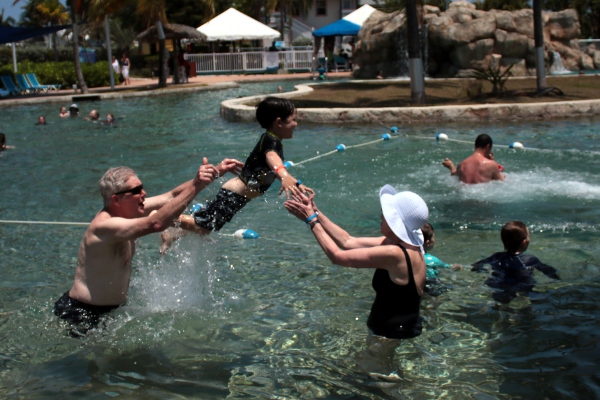 The Pip in flight.

The trip was a gift from my parents, who came with us, and helped make it tons of fun for the kids. Thanks to their help, we had the kids outnumbered at all times, even without using the floating day care option of the kids' clubs. 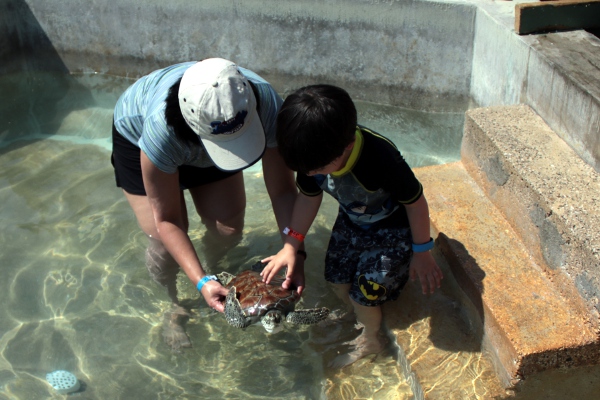 Kate and The Pip touching a baby sea turtle at the Cayman Turtle Farm. 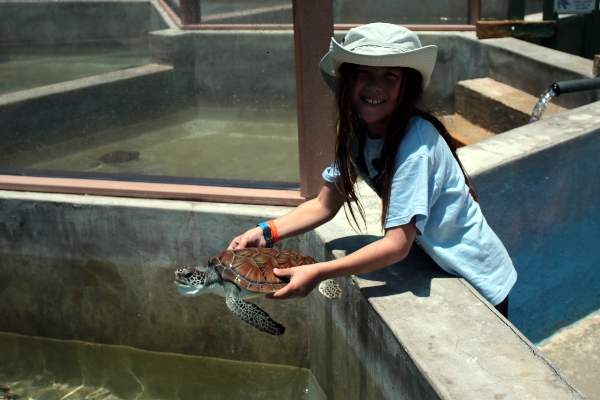 SteelyKid holding a turtle she caught herself.

One of the port stops was Grand Cayman, where we visited a turtle farm. Part of the turtle side of the operation (they also had a snorkeling area and a freshwater pool) was a set of shallow tanks where you could touch and even pick up young turtles. SteelyKid doesn't deal well with heat (my Northern European genes have their down side...), and had a bit of a meltdown here, but rallied to catch a couple of turtles. They're very agile in the water, so this is a testament to the reflexes she's honed with all that taekwondo... 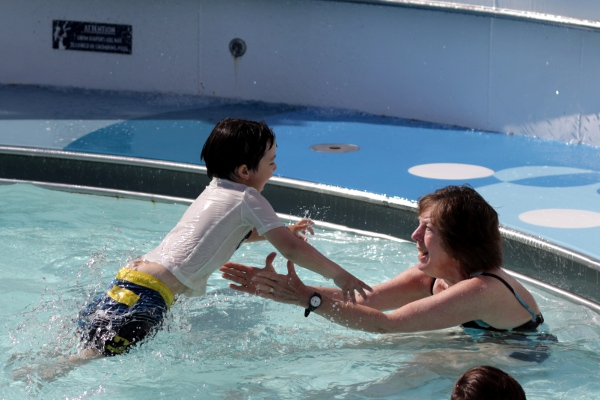 The Pip jumping to Grandma in the wading pool on the ship. 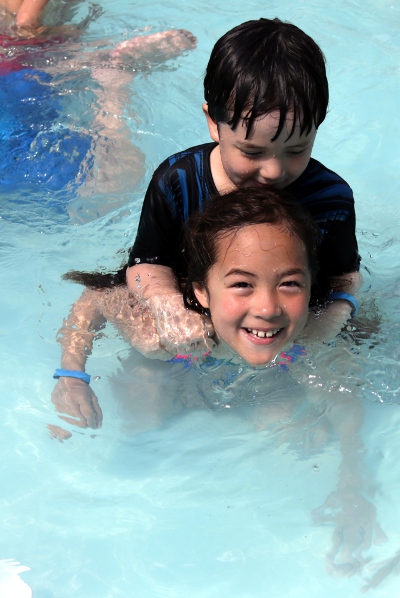 SteelyKid giving The Pip a piggyback ride in the wading pool on the ship.

There were two kid-friendly swimming pools on the ship, one a shallow wading pool and the other a four-foot-deep pool next to a giant video screen playing Pixar movies. The latter was kind of terrifying, at times, because it was full of bigger kids careening around playing tag games, and I seriously thought one of them was going to swamp The Pip. So I don't have any good photos of that.

The wading pool, on the other hand, was a rich source of photos of the Little Dude, who really loved splashing and "gliding" and jumping in the water. You wouldn't guess that up until mid-July last year, he acted like the swimming pools at day care were bubbling vats of sulfuric acid. 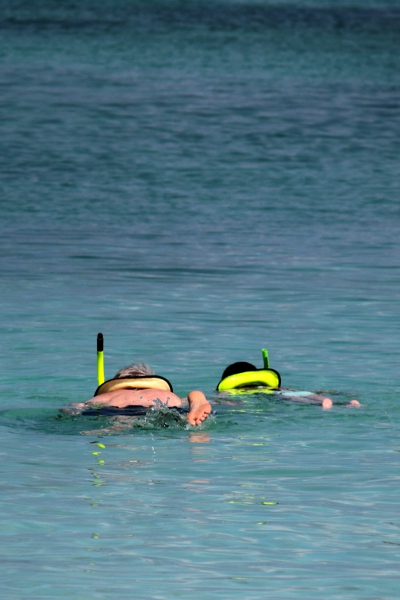 SteelyKid learning to snorkel from Grandpa. 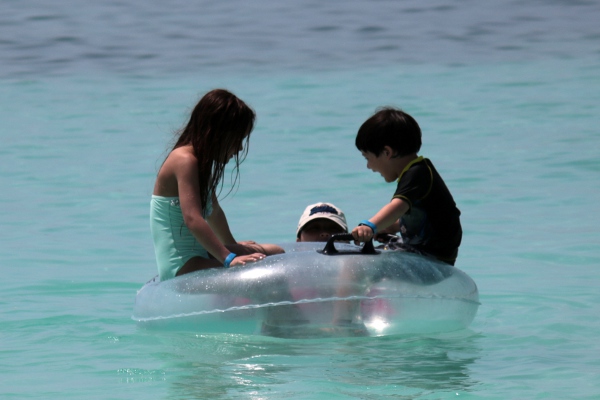 SteelyKid and The Pip floating in a tube at the Castaway Cay beach. With just-barely-visible Kate.

It wouldn't be a Caribbean trip without a beach. As mentioned before, SteelyKid tried snorkeling for the first time at Castaway Cay, as seen in the photo above. After lunch, we went on an epic swim, while The Pip bobbed happily on an inflatable tube in shallower water (the second photo is after our snorkel expedition, when SteelyKid joined him for a bit). 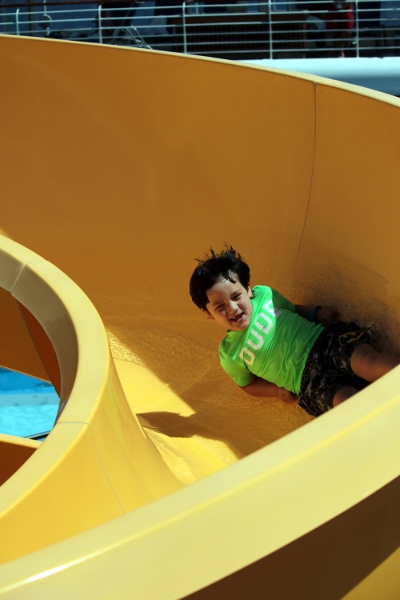 The Pip going down the waterslide on board. 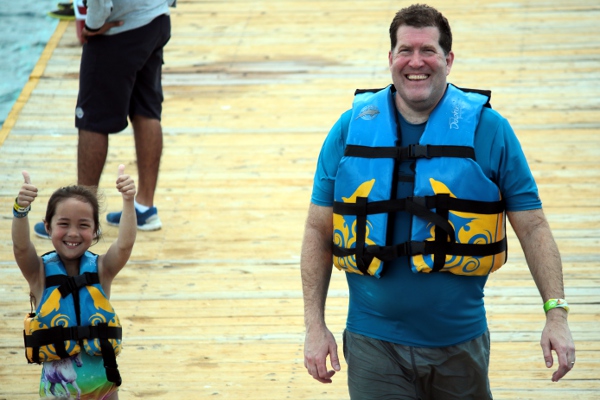 SteelyKid approved of her swim with dolphins.

We were very busy on this trip, especially the last day or two after the kids finally tried the water slide, then went on it over and over again. The second photo is obviously a bit of a cheat, as I'm in it-- that was at the swim-with-a-dolphin excursion in Cozumel, where I gave my father my camera with the telephoto lens, and he took a few shots from the approved photography locations. (They only let you take pictures from a good long way away from the actual dolphin swim, because they want you to buy shots taken by their professional photographers who are right up close.... And I have to admit, they did a better job than I could, as you can see in this composite I posted a while ago:

SteelyKid swimming with a dolphin, The Pip on a waterslide.

But, you know, that guy got to be a lot closer to the action, and had a much fancier camera...) 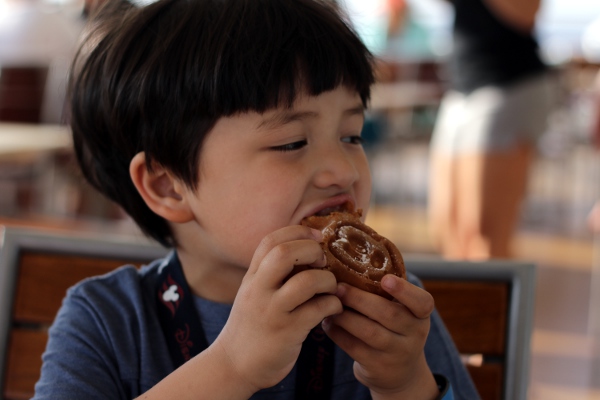 The Pip eating the ears off a Mickey Mouse waffle. 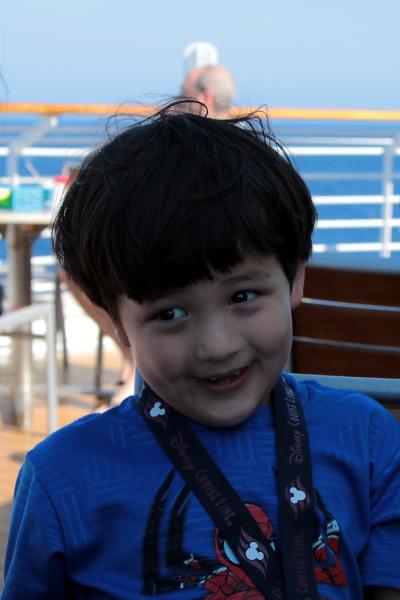 The Pip telling us a joke of some sort.

I don't really have corresponding photos for SteelyKid at rest, mostly because she didn't hold still for long the entire week. She got to do the dolphin thing without him, though (that was only for ages 5 and up), so he gets a couple of extra photos. The top one shows him chowing down on the ears of a Mickey-shaped waffle, which is one of the very few things he would reliably eat. He's an insanely picky eater.

The bottom shot is my new favorite picture of him, as it gets his fantastic facial expression when he tells a joke. He's a little hazy on how humor actually works-- most of his jokes involve copying the form of more traditional jokes told by his big sister, but plugging in other nouns that make no sense-- but he's so cute and pleased with himself when he tells them...

And there's a massive dose of cute-kid photos to send you into the weekend. Enjoy.

As mentioned in passing a little while ago, we spent last week on a Disney cruise in the Caribbean, with the kids and my parents. We had sort of wondered for a while what those trips are like, and since the first reaction of most parents I've mentioned it to has been "Oh, we've thought about that…

Since I've given up on the strict daily arrangement, I'm going to somewhat arbitrarily assign photos from the cruise numbers corresponding to the days of the last two weeks. I'll do this in two big photo dump posts, grouped by whether or not SteelyKid and The Pip are in the shots. And since this is…

So, when last I posted an update on kid stuff, we were about to embark for a week in Mexico with family. As you would expect, I have a huge pile of pictures from this, but most of the cute-kid shots feature the kids with their cousins from Illinois, and I try to avoid posting photos of other people…

As a marine biologist by training, I naturally love the ocean and just about everything in it. So it is such a treat for me to be able to just go out and enjoy what I love. Right now, I'm in between my last job as a simple graduate and being a full time graduate student, so I've got a little free…

And now she will just change it to any other animal she can think of. Her favorite is interrupting Juno (our dog's name) and instead of barking, she will just lick you.

I wish I could say I just laugh to play along, but I find it hilarious. I am apparently a 3 year old.

Those memories of playing with the grandparents will be priceless and last forever. The trip was a smart move on their part, and I now understand the marketing I see from Disney's cruise line! My only question is, did they spend much time with their own kid? ;-) I'll bet you had a blast watching them interact with your kids. Probably brought back memories of your own childhood.

The "Interrupting [Animal]" joke is a perennial favorite, though The Pip doesn't always remember that the point is to INTERRUPT, and will often politely wait until the end of "[Animal] who?" to make the noise.

It was a great trip, and we were extremely grateful both for the great memories and the adult back-up that allowed us to get the occasional quiet moment without worrying what the kids were up to... (We could've used the "Oceaneers" areas for some of that, but I felt a bit like a heel taking the kids to a cool place and then dumping them in a day-care equivalent.)