A delayed photo dump this week, because I was solo-parenting last week while Kate was traveling for work, and then I took the sillyheads down to Long Island to visit my grandmother while Kate was at Readercon. Recovering from all that took a lot of time, plus there was a bunch of computer wrangling in there. But, on the bright side, you get several cute-kid photos in this set...

And here's a bonus image, which captures something of the flavor of travel with the sillyheads: 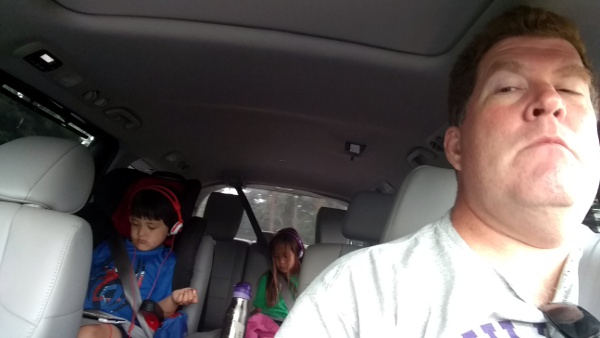 Selfie in the car with the kids engrossed in their tablets.

(That was stopped at a light, not actively driving, so don't waste everyone's time leaving chiding comments about the dangers of using phones while driving.)

One of the main reasons I wanted to get down to Long Island with the kids was the chance to visit one of my favorite spots, Jones Beach State Park. Robert Moses was a sonofabitch in a lot of ways, but setting the prime beach area on the Atlantic side of Long Island aside for a public park redeems a lot.

This is a panorama stitched together from about five shots, and the panorama-stitching program I have really struggled with these-- I have some wider shots, but it comepletely choked on those, I think because of the lack of vertical landmarks. This one worked out reasonably well, though I had to crop out some weirdness at the edges. You can see a larger version on Google Photos. 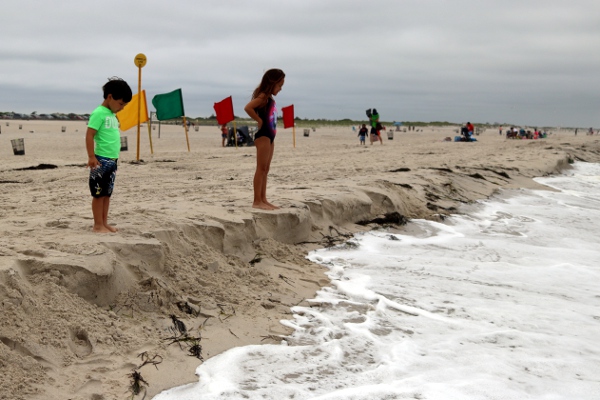 The Pip and SteelyKid taunt the waves from high ground.

I love Jones Beach because I enjoy body-surfing in the waves there. The day we went wasn't great for that-- it was kind of grey and cloudy, and there was a lot of wind-driven chop that made it hard to find good waves for riding, but I had a great time in the water. The kids were a little more dubious about the ocean, but had a great time running up to and then away from the breaking waves. There was a lot of "Ha, ha, you can't get us!" from the top of this little sand ridge, and shrieking when a few waves topped it. 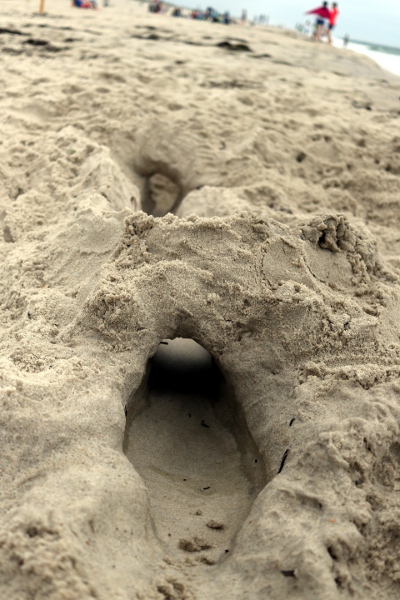 The tunnel in the sand that the kids spent a long time constructing.

It wouldn't be a trip to the beach without building a sand castle. In this case, they didn't build up but dug down, making a long tunnel that they'd pour water into from a bucket. The goal was to partially fill "ponds" at both ends with water, and there was much cheering when it worked. 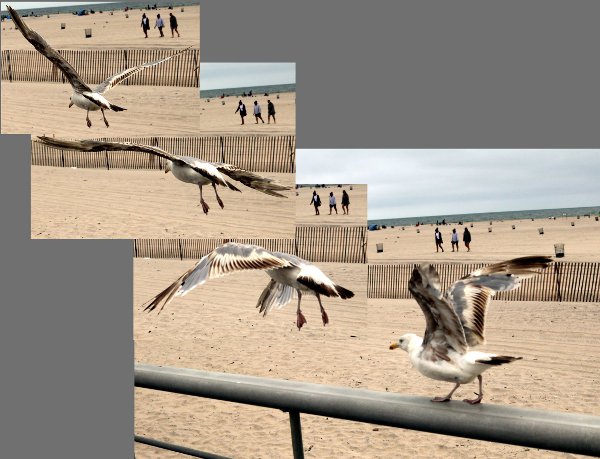 Gull taking flight on the boardwalk at Jones Beach.

It wouldn't be a photo dump post here without at least one bird picture. And the beach is, of course, overrun with seagulls. So here are several shots of a gull taking flight, composited together in GIMP, because it was that kind of morning a few days ago. 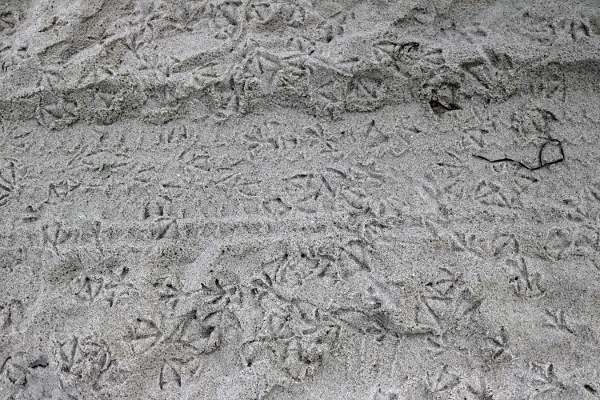 Random artsy shot of seagull tracks in the sand.

Here's your random artsy shot for this set: the complex pattern of footprints left by gulls swarming all over the sand. 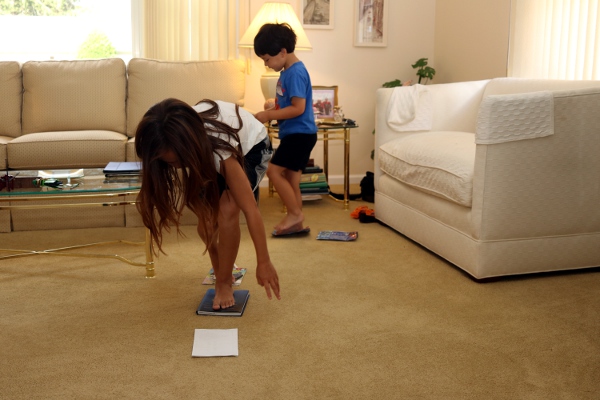 The kids playing "Lava Walk" at my grandmother's house.

After a morning at the beach, we spent a bunch of time at my grandmother's, where the kids amused themselves playing "Lava Walk." The floor was held to be hot lava, so you weren't allowed to touch the rug, but had to walk on various books and papers. SteelyKid managed to get all the way across the room and back this way. 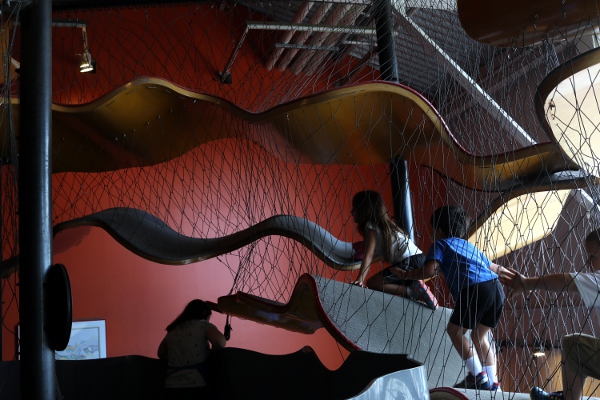 The kids making their way up the awesome climber at the Long Island Children's Museum.

Before heading home on Sunday, we went to the Long Island Children's Museum, which is very convenient to my grandmother's house. We'd never been there before, but it turns out to be pretty awesome, especially the giant climber they have right inside the entrance, with several levels of carpet-covered wooden platforms making a sort of three-dimensional maze. The Pip was just tall enough to go in, and it was the biggest hit of the whole visit. 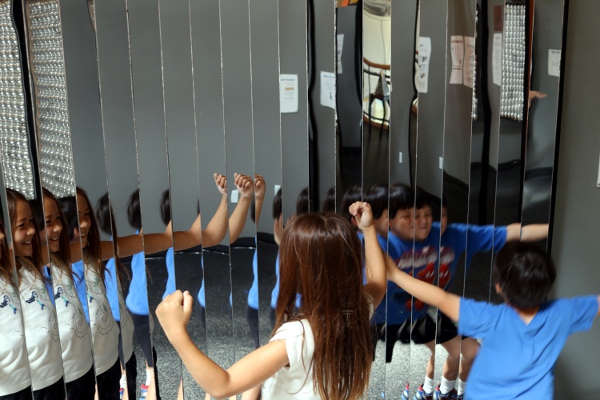 The kids in front of an array of mirrors at the Long Island Children's Museum.

The rest of the LICM includes a bunch of very well-done science-museum exhibits, and as an AMO physics person I'm obliged to include at least one photo from the optics section. This was a semicircle of mirrors at slight angles to each other, and the kids greatly enjoyed mugging in front of it.

All in all, a very successful (but exhausting) road trip. The LICM in particular was a great discovery, because it's a perfect morning activity to burn off some energy before lunch and the long car ride home. We'll definitely be going back there in the future.

Hi Chad Orzell,
I'm sorry for commenting off-topic here, but I was wondering whether you have any QM/entanglement posts still enabled for comments? Or, could I raise my issue somewhere else...or email you...or do it here? Or not at all :o)