It's been over a month since I did a photo-a-day post, largely because I haven't been taking many pictures for a variety of reasons. I do still mean to get a year's worth of good photos done, but the "daily" part has completely disintegrated at this point.

As a way of getting somewhat back on track, I've edited up the best of the shots I took in the loooong break since the last batch I posted. This spans all the way up to the present, and a few are just cell-phone snaps, but it's better than nothing. since these aren't really associated with particular days, I'll group them thematically instead. 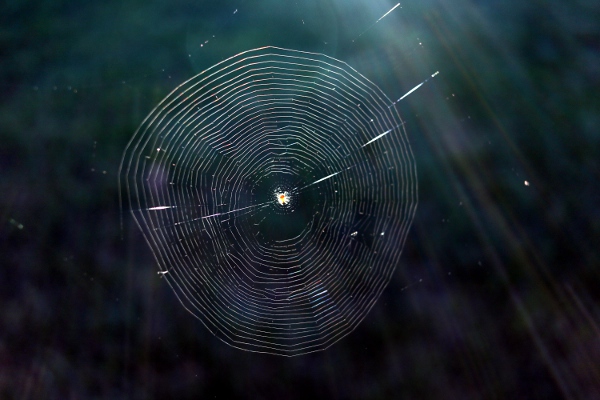 A spiderweb in the back yard of Chateau Steelypips, catching the early-morning light. 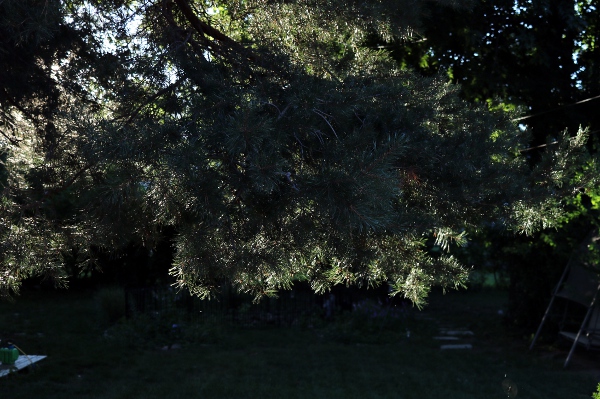 The second of these is what I went outside to try to photograph-- I liked the light effect of the sun hitting this branch (which has since been pruned away, because it hung down to about mid-chest level on me, and was a major impediment to moving around the back yard). when I went out to get that shot, though, I noticed the spiderweb stretched between it and the tall arbor vitae (it's just visible in the lower right of the tree picture), which was an even better photo. 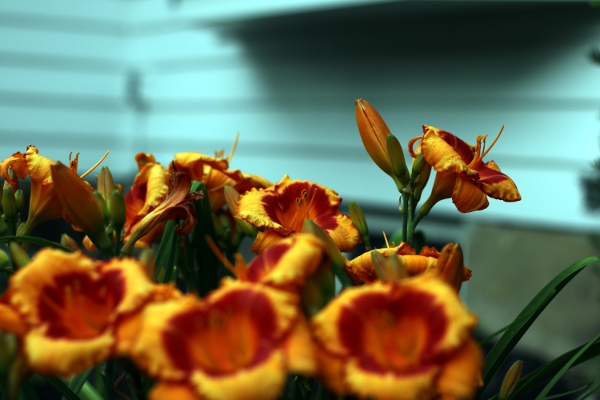 Tiger lilies in front of our house. 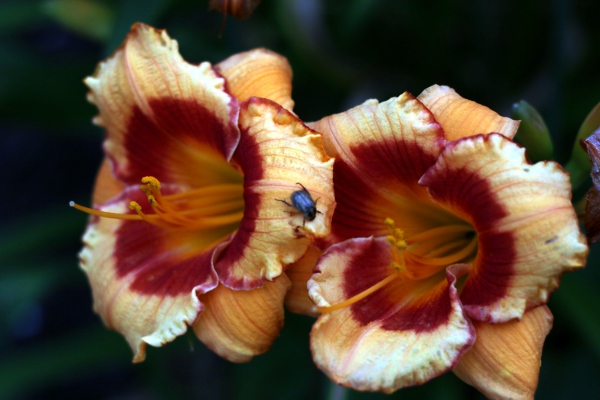 Beetle on the lilies in front of Chateau Steelypips.

These flowers are right in front of the bay window on the front of our house, and are really beautiful when they bloom. They also attract all manner of bugs, but that's not a terrible thing... 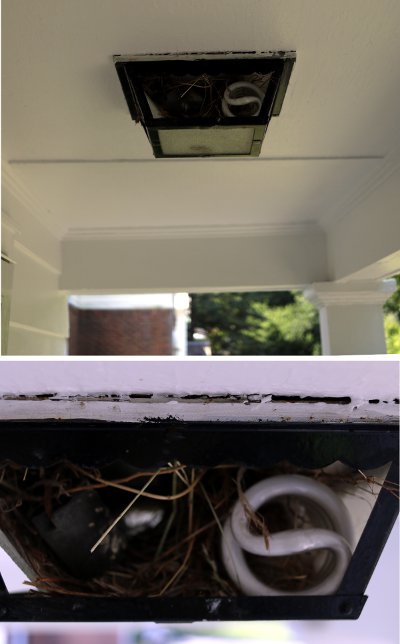 The bird nest in our front-porch light.

Last year, we had house sparrows nesting in a hole in the outside wall near SteelyKid's room. We plugged that hole up, so in retaliation, they moved to our front porch light. One of the glass panes broke a while back when I was changing the bulb, and I didn't bother trying to find a replacement, thinking there wasn't any problem with leavig it open. Shows what I know...

It stays light enough late enough that we don't really use this light in the summer, so I think they managed to successfully hatch and raise some chicks in this. At least, I used to hear lots of frantic peeping as I went in and out the front door, and I don't any more...

When it gets cold, I'll clean this out, and maybe cover over the gap so they don't do this again. Which probably means next summer they'll be nesting inside my car, or something. 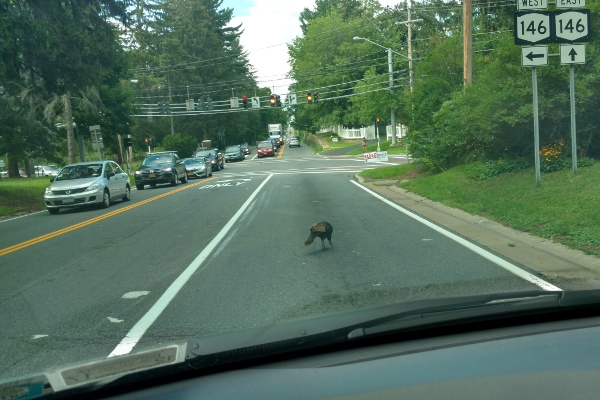 Wild turkey crossing Balltown Road in Niskayuna, taken through the windshield of my car.

Why did the turkey cross the road? To get into a photo dump post, of course.

This is actually a still frame from a short video of the wave pool at Six Flags, that I used for a physics post over at Forbes. The kids could've stayed in this all day, and the next time we go there, they probably will. 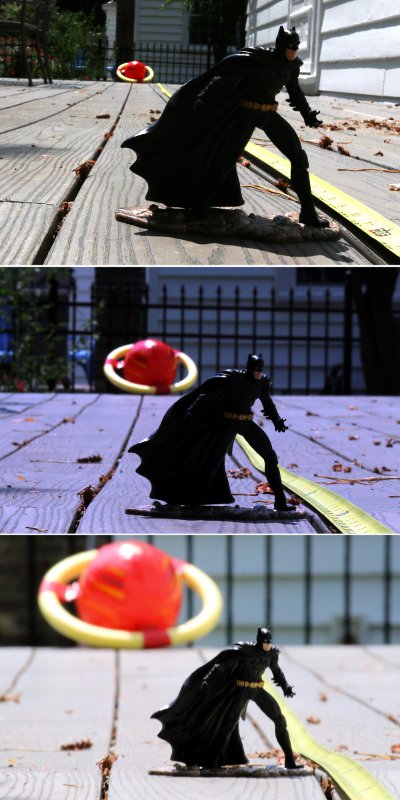 Shots of a couple of toys with different lenses, demonstrating how to make distant background objects look huge.

Another image from a post at Forbes, this one on using long focal lengths to make background objects look huge. 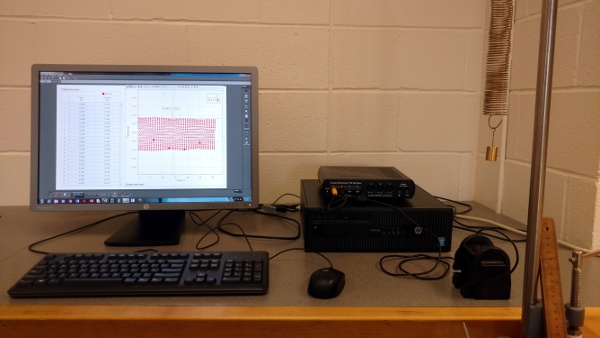 The computer apparatus for the spring lab I'm writing up. 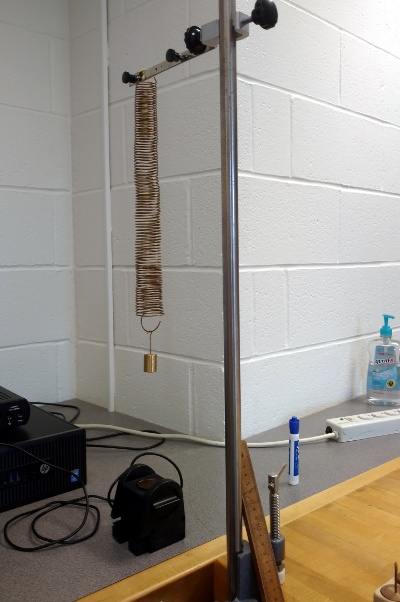 The hanging spring for the lab I'm working on, fortuitously aligned with the corner of the wall behind it.

One of the many projects I'm juggling at the moment is to write up a pedagogical paper based on an intro mechanics lab I do with springs. This involves using a computer to record the motion of a mass on a spring, so just in case I need it, I took a photo when I was taking example data.

The second picture just shows the hanging spring, and wouldn't be interesting except for a chance alignment: without realizing, I managed to line the metal pole holding the whole apparatus up with the corner of a pillar in the wall behind. I probably wouldn't've been able to do this on purpose, but by not paying attention, I was able to create kind of a weird effect with the background. 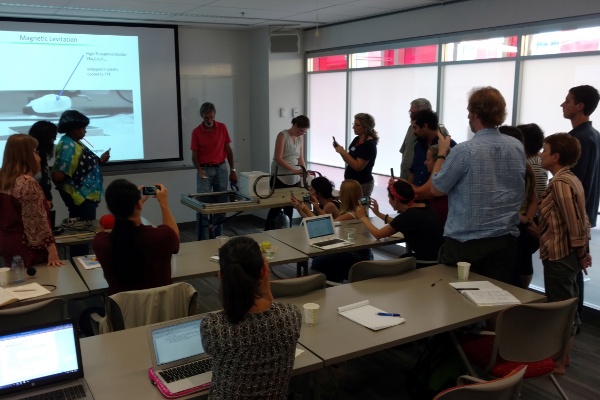 One of the things keeping me away from the computer was a second round of the Schrodinger Sessions workshop at JQI. I forgot to bring the good camera with me (which tells you something about what my state of mind has been of late), so the only documentation you get is this crappy cell-phone snap of Steve and Emily doing magnetic levitation demos while writers take pictures with their phones... 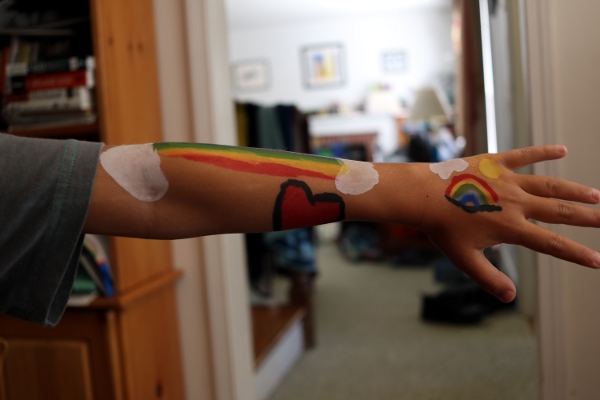 SteelyKid's arm, covered with rainbows that she mostly painted herself.

The kids had a couple of play-dates in there, which included getting crazy with the face paint. SteelyKid did most of these rainbows (on her left arm) herself. 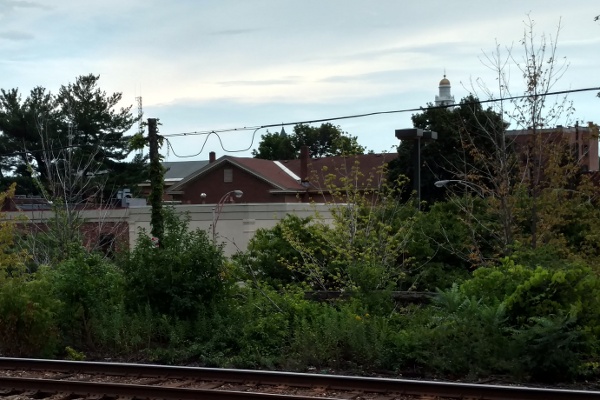 Loops in the power line behind the Schenectady Amtrak station look like glasses.

Credit for this one ought to go to The Pip. We were up on the platform at the Amtrak station, for reasons that will become clear later, and he said "Hey, that wire looks like glasses!" 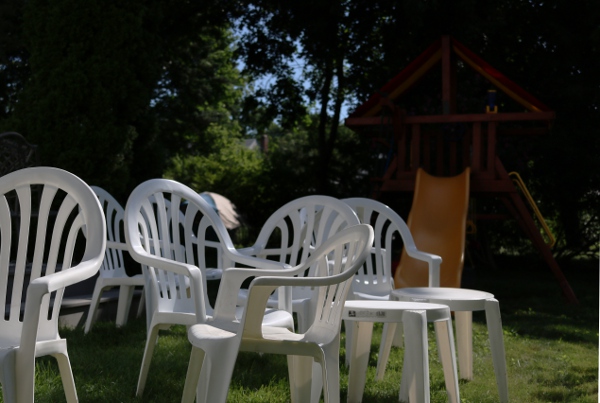 Another big time sink in the last month was SteelyKid's eighth birthday party, hosted at our house, which required a fair bit of prep. This shot of a scattering of white plastic chairs in front of the play set is your random artsy shot for this batch. 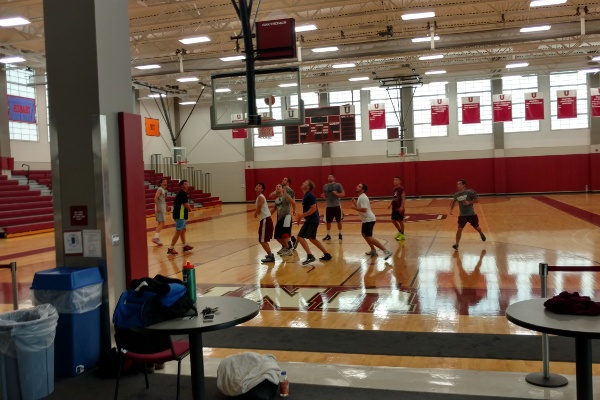 Noon hoops at the Viniar Center.

I actually took this for eventual use in a blog post, but it's good documentation of one of the things I've spent (not nearly enough) time on: playing pick-up hoops at lunchtime. 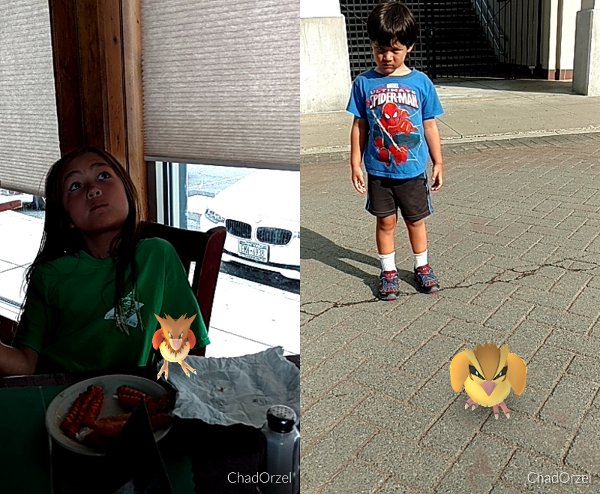 The kids with bird-type Pokemon.

After a few weeks, I gave into SteelyKid's pleas, and installed Pokemon GO on my phone. which means I now have to wrestle it out of her hands every time we leave the house, but on the bright side, it makes for some amusing photos.

It also leads to weird wandering in hopes of encountering new critters, which is why we were up on the Amtrak platform (after dinner at the Irish pub across the parking lot) to get photo 326 above. 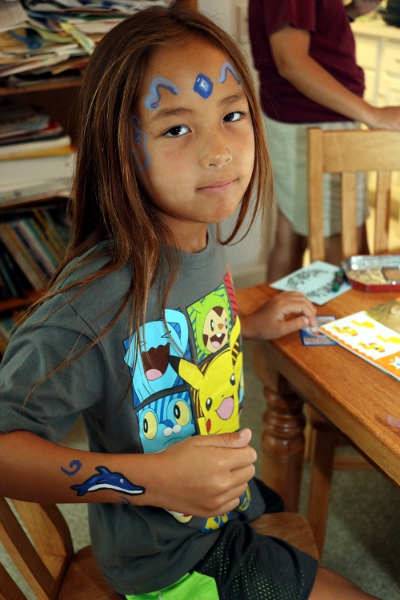 SteelyKid, with face-paint by Kate.

SteelyKid did the rainbows you saw above, but Kate has become a real face-painting master, as you can see here. 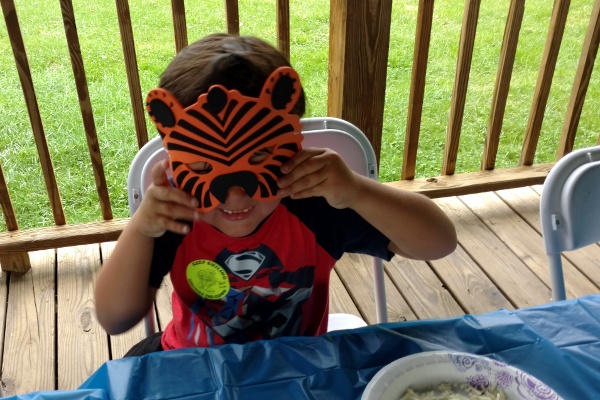 The Pip is a scary tiger.

We've also had several birthday parties in there, including one that provided the Little Dude with this tiger mask. 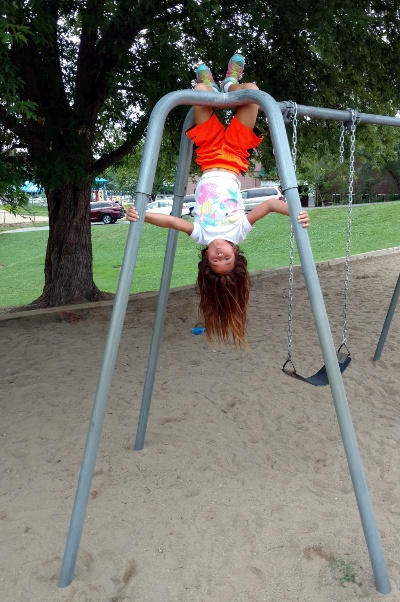 This isn't terrifying at all.

The same party provided SteelyKid a chance to show off her climbing and hanging skills. 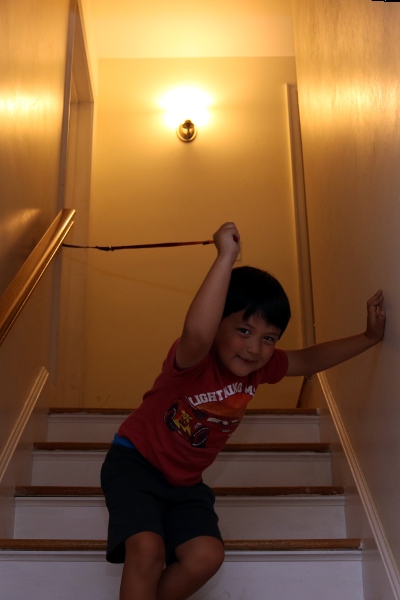 The Pip built a remote door closer, and is very pleased with himself.

At some point, The Pip got the idea to string together some dog leashes and attach them to the handle of his door, letting him pull it closed from halfway down the stairs. This led to an amazingly long time spent "trapping" Kate in his room. 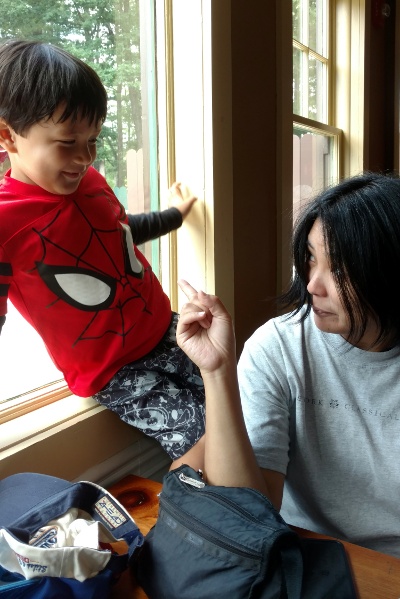 Kate cautioning The Pip not to do whatever mischevious thing he's planning.

This might be my favorite photo of the whole lot, for the combination of facial expressions. 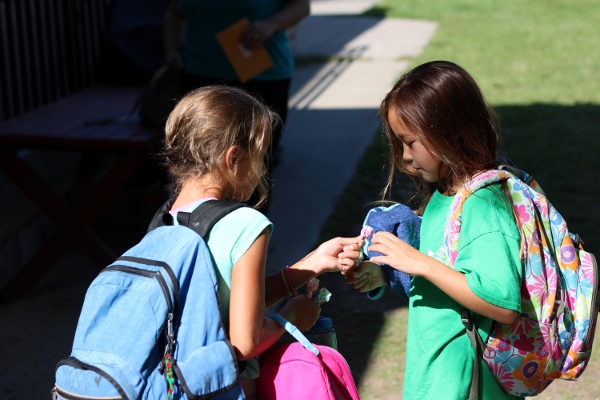 SteelyKid in negotiations with her BFF about who gets which lollipop flavors.

This past week was the end of the summer day camp that SteelyKid goes to, which saw the kids receive a remarkable amount of candy. Which was then redistributed through a complex series of negotiations over who liked which flavors best. 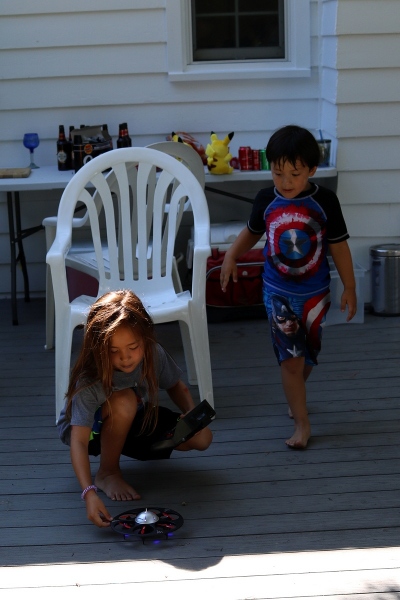 SteelyKid setting up her drone for a test flight.

Finally, here's SteelyKid with the most awesome of her birthday presents, a radio-controlled quad-copter with a camera, from her Aunt Erin in California. Because who doesn't want their own personal drone? Historians may well note this as a pivotal step toward SteelyKid's eventual takeover of the world with the help of an army of flying robots.

So, that's a great big bunch of photos, all right. which still leaves me around 20 behind the photo-a-day pace, but I intend to make an effort to catch back up before the end of the month. I'm going to start carrying the camera with me more regularly, and see what I can come up with from that.

At least the train station was an accessible location. In the town where my mother lives, there is a Poké spot at the end of the fishing pier. Problem is, the pier is closed for refurbishment this summer. We saw quite a few players along the waterfront--I think there was another Poké spot along the waterfront. I don't know for sure because I'm not a Pokemon Go player.