Another day, another batch of photos from August. 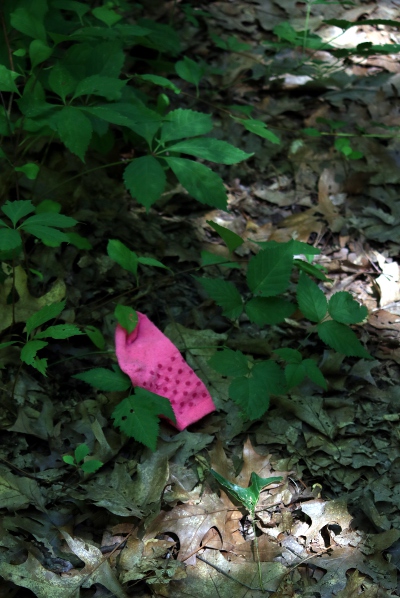 One lost sock next to the hiking path in the Reist bird sanctuary.

This is actually a slight reversal of chronology, as the hike through Vischer's Ferry was the day after I went for a hike in the H. G. Reist Wildlife Sanctuary. The pictures from Vischer's Ferry were better though, as despite the name I didn't see much wildlife in the Reist Sanctuary. I did, however, find this bright pink child-size sock sitting next to the trail right after a fork. Presumably a way for some wandering toddler to find their way home... 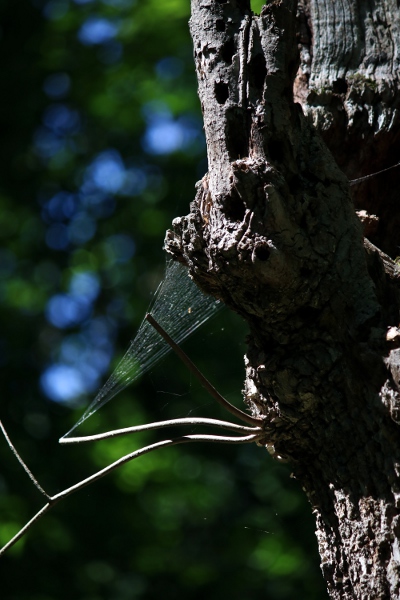 Spiderweb near the top of a tree in the Reist sanctuary.

I didn't see much in the way of wildlife in the wildlife sanctuary. They did, however, have a wealth of spiderwebs, mostly strung face-high across the path. This one high up in a tree was a pleasant exception, and caught the light well. 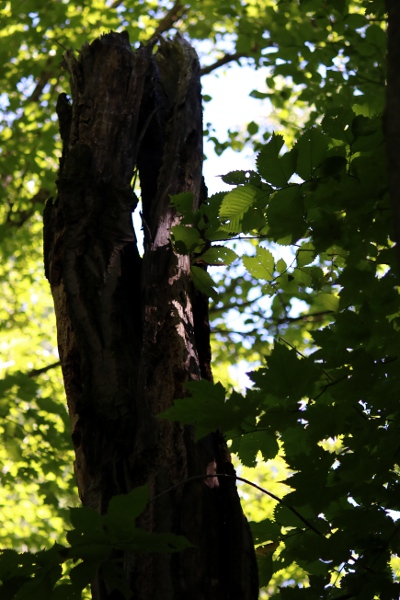 A dead tree trunk with a hole clean through it, in the Reist sanctuary. 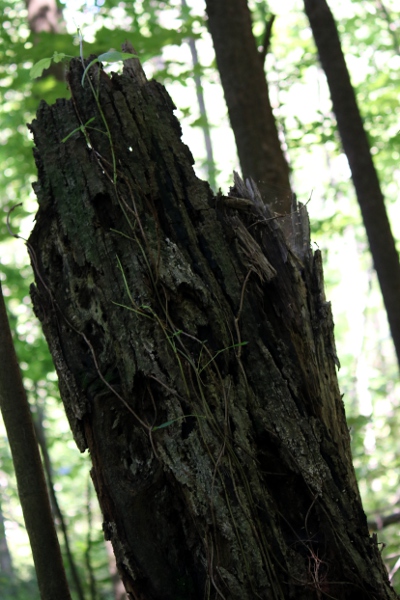 Fine tendrils of new vine on a dead tree in the Reist sanctuary.

The sanctuary did have a wide variety of interesting-looking dead trees, though. The second of these is one of those "imprinted deeply on The Lord of the Rings" moments, because this kind of thing always reminds me of Sam and Frodo finding a defaced statue in The Two Towers. 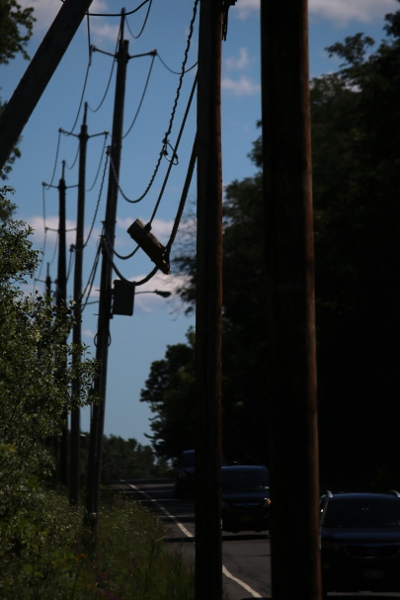 The hanging remains of a broken telephone pole in Niskayuna.

On the way back from the Reist sanctuary, I stopped and made a stab at getting an image I've wanted for months. this is a telephone pole on Balltown Road that was hit by something and shattered several months ago. They brought crews in and cleaned out the wreckage, but left this one bit of pole hanging from the wires. I have no idea how the wires are attached in order for this to seem like a good idea. Or maybe it's just capitalism in action-- something like "National Grid owns the power lines at the top, and takes care of the poles, but can't be bothered to remove a hanging weight stressing the telephone lines owned by Verizon down below." 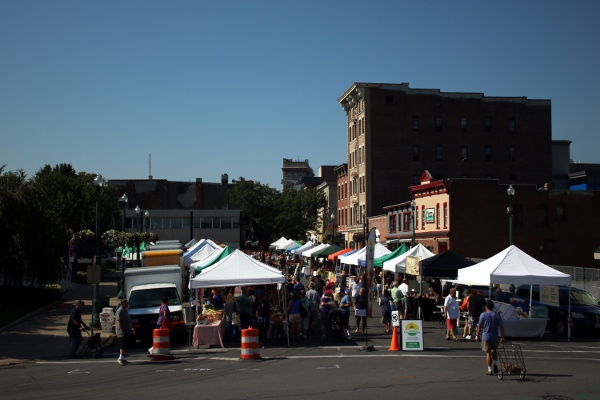 Every Sunday morning, I take the kids to the Schenectady Greenmarket to get a few things and give Kate a bit of a break. I don't generally take the camera along, though, because it's hard enough to wrangle the sillyheads without also looking for aesthetic views. My parents took the kids for a weekend in late August, though, so I finally got some decent shots of the market; this one is from the steps of the Post Office across the street.

The market takes up two streets in an "L" shape, so here's the same scene from the other angle: 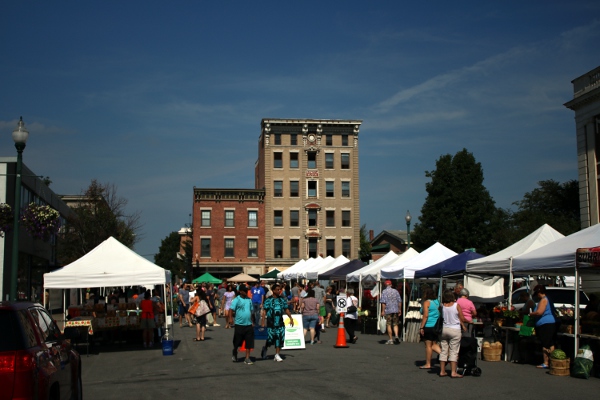 I'm sort of torn as to which of these I like better; the first gives a better sense of the market itself, because it's a longer street and thus more crowded, but the isolated building in the second really pops. So I'll put them both here, and you can decide for yourself which is the real photo 358. 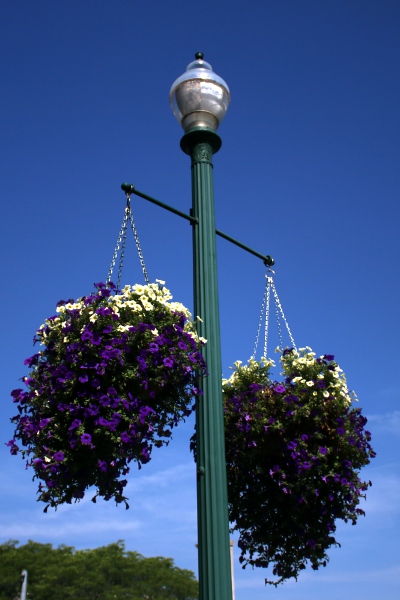 Planters hanging from a light pole in downtown Schenectady.

I'm sort of proud of the alignment in this one, as there's an ugly smokestack behind this that I managed to hide pretty well behind the lamp post.

("Why not pick a different post?" you ask? Because the others on this street don't have as clear a view of the sky as this one, and it was easier to hide the smokestack than the stuff that would clutter the background for the others.) 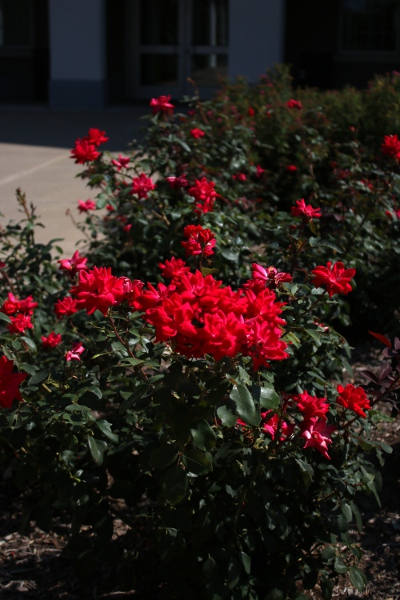 Roses outside the Wold building at Union.

The end of August means the start of a new school year, which means making campus look all pretty for the new students when they arrive. I'm not sure if these roses in front of the Wold building just bloom at a fortuitous time, or if they're recent transplants, but they're very pretty. 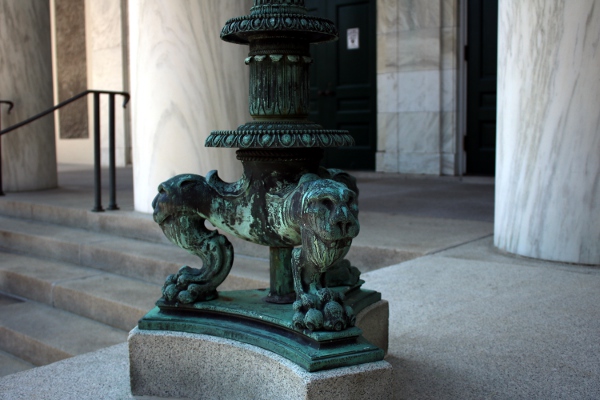 Cool lions on the base of a lamp post by Memorial Chapel.

Probably the most enduring affect of this experiment in taking lots of pictures will be a somewhat heightened awareness of odd little photogenic things around me. Like these funky lions holding up a light outside of Memorial Chapel. I've been here fifteen years, and never noticed these guys until I was wandering around campus with a camera, looking for interesting shots.

That's it for today. The final five photos will be posted in one last photo dump, probably tomorrow morning, but maybe Tuesday.