A Holiday Hubble Handout: A Horseshoe?

"A farmer travelling with his load

Picked up a horseshoe on the road,

And nailed if fast to his barn door,

That every blessing known in life

And never any kind of harm

One of the greatest joys the Hubble Space Telescope has given us is the ability to peer deeper into the distant Universe than ever before. Not just at the giant, luminous galaxies visible with smaller, ground-based telescopes, but at the great sea of galaxies billions of light years away. 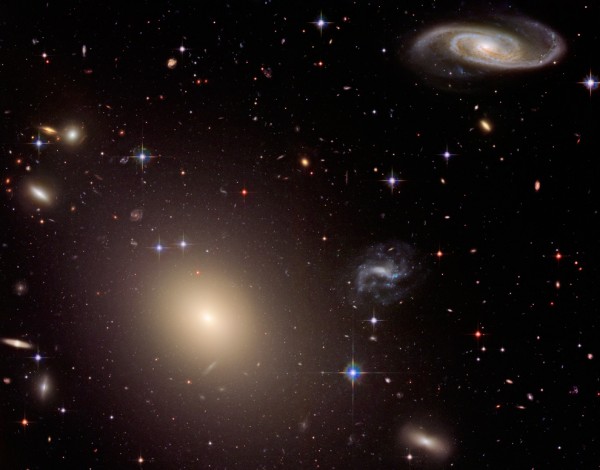 But every once in a while, a giant galaxy like this will grant us an incredible gift. If there's another distant galaxy perfectly aligned along the line-of-sight in between us and that luminous, giant elliptical, but behind it, we can be treated to one of the rarest sights in the cosmos: an Einstein ring. 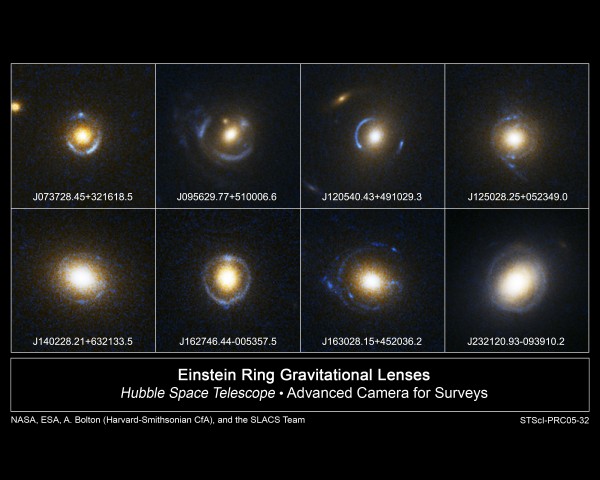 While the giant red galaxies, above, might be something like two-to-four billion light years distant, the "rings" around them are actually individual galaxies twice as far away! Just as an optical lens can focus light and bend its path, on large enough scales and from massive enough sources, gravity can do the same thing! 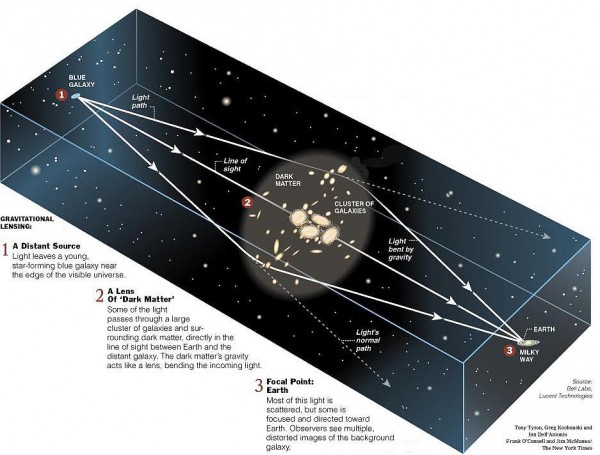 Rather than travel in a straight line, gravity will bend spacetime, forcing light into a curved path. If a very distant galaxy is properly lined-up with us and a less distant -- but very massive -- galaxy, its light will not only be bent into a ring if the alignment is perfect, but its light will be greatly magnified, making a dim galaxy appear very bright and an otherwise invisible galaxy appear quite prominent.

If the alignment is close but imperfect, you're likely to see a stretched arc and (possibly) multiple images of the same galaxy, but not quite a ring. 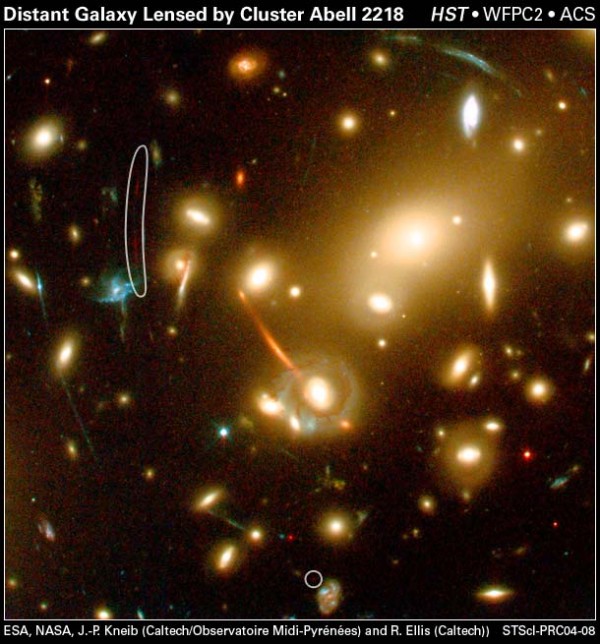 Well, has Hubble ever captured one for the ages; take a look for yourself! (And try not to be blinded by the two faint stars from within our own galaxy that pollute this image!) 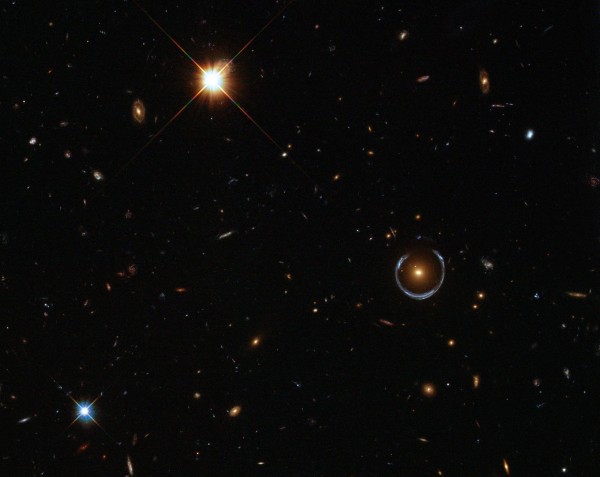 Image credit: ESA / Hubble & NASA, and as always, click for the amazing version.

Highly magnified and almost perfectly aligned, this distant galaxy around the luminous, red galaxy LRG 3-757 makes about 80% of a full ring: a cosmic horseshoe. Originally discovered by the Sloan Digital Sky Survey, there's still nothing in the Universe that compares to Hubble for taking close-up, high resolution pictures of distant, spectacular objects like this. Let's zoom in for a better appreciation. 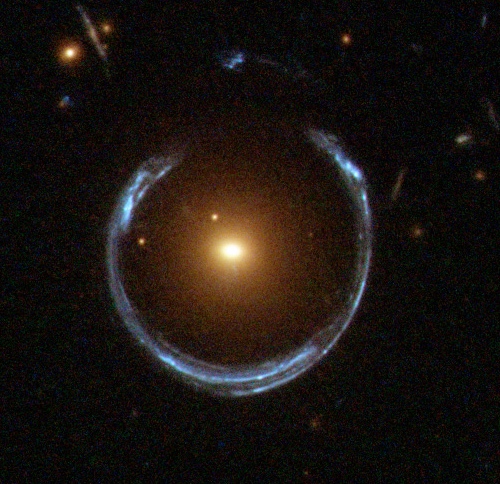 Do you realize how tiny this image is? The entire ring is just 11 arc-seconds in diameter, or a mere three-thousandths of a degree wide! And yet, look at what Hubble can show us.

If you're anything like me, you might be wondering what this galaxy would look like without the magnification, without the bending into a nearly perfect circle, and without the intervening luminous red galaxy at all. If you want a good idea, just look above the horseshoe in the very same image, at a set of galaxies at comparable distances. 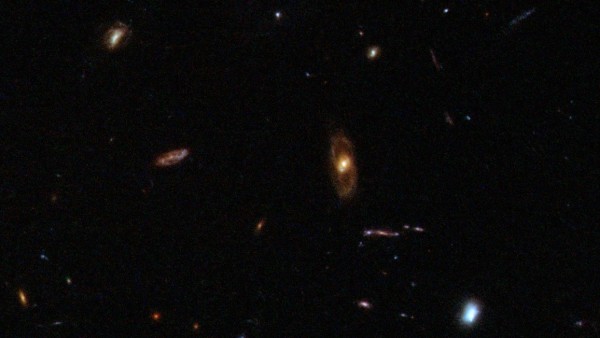 See that bright blue galaxy in the lower right of the image? Yeah, not that one; it's too close and too bright! A little to the left, you can see a smaller, fainter galaxy that's a little more purple in color, and that's more like it. Because the horseshoe-shaped galaxy? That's over 10 billion light years away, from a time when the Universe was just three billion years old.

So thanks for the holiday treat, Hubble, which has been delivering them every year since 1990! Two decades later, there's still nothing in the world (or in space) that compares to Hubble. Here's hoping that -- even with no more shuttle and no more servicing missions -- it continues to deliver for many years to come.

I think that should be 11 arc-seconds.

John @1, thanks for the catch; fixed! The entire original Hubble image is only 2.6 arc-minutes across, so that would have been quite the feat!

AJ @2, the nearer galaxy falls into a class known as Luminous Red Galaxies: large but old galaxies that have hardly undergone any star formation at all recently. They're intrinsically extremely red in color. At the particular wavelength of the lensed galaxy -- z=2.379 -- the Lyman-series hydrogen emission lines, normally invisible because they're in the UV, appear in the B-band (blue band) filter, making this galaxy appear bright blue. If it were close by (i.e., with a negligible redshift), it would appear reddish-pink, because the hydrogen emission line we'd see would be the Balmer-alpha line, at 656 nm. At these redshifts, not even the IR filter on Hubble can catch that line now.

Perhaps a too stupid question, but what (details) would Hubble see if its pointed towards earth? Or are the optics just of no use to focus on something so nearby?

Yeah, wow - looking at the picture of the 11 arc-sec. ring on typical monitor at viewing distance, is about like using visual at around 4000x. Mars at closest would be over double the apparent size.

In my comment, I forgot to add that I read all of you excellent posts. Keep it up.

Is there any gallery of de-lensed images? I see this picture and I wish I new more about image processing to straight that galaxy.

Just as an optical lens can focus light and bend its path, on large enough scales and from massive enough sources, gravity can do the same thing!

If you treat the region around a large mass as a spherical lens with a gradient index of refraction, could you analyze gravitational bending in terms of classical optics?

Have been hearing lately that the current speed of light may not be constant for the history of the universe; the speed limit mary vary through time. Also another idea that the speed of light may vary depending on location. Does info from these way-old early galaxies shed any 'light' on these proposals?