"I tell you, we are here on Earth to fart around, and don't let anybody tell you different." -Kurt Vonnegut

Kurt Vonnegut may have it right for most of us, but not all of us spend all of our time on Earth. A select dozen of us, in fact, have made it, as Cat Power would sing, to

Back in 1971, the Apollo 15 astronauts made huge strides in space exploration, making use of the first manned lunar rover and spending over 18 hours on activities outside of the spacecraft. But two (of the three) crew members experienced heartbeat irregularities on the mission, and the cause was unknown. This was the first time such irregularities were observed in Apollo astronauts, and NASA was, understandably, unhappy about this. Their biomedical research team initially concluded (incorrectly) that it was likely due to a potassium deficiency, and so some modifications were made to the astronauts' diets for the next mission.

A modification, mind you, that would change the place in history of one astronaut forever. 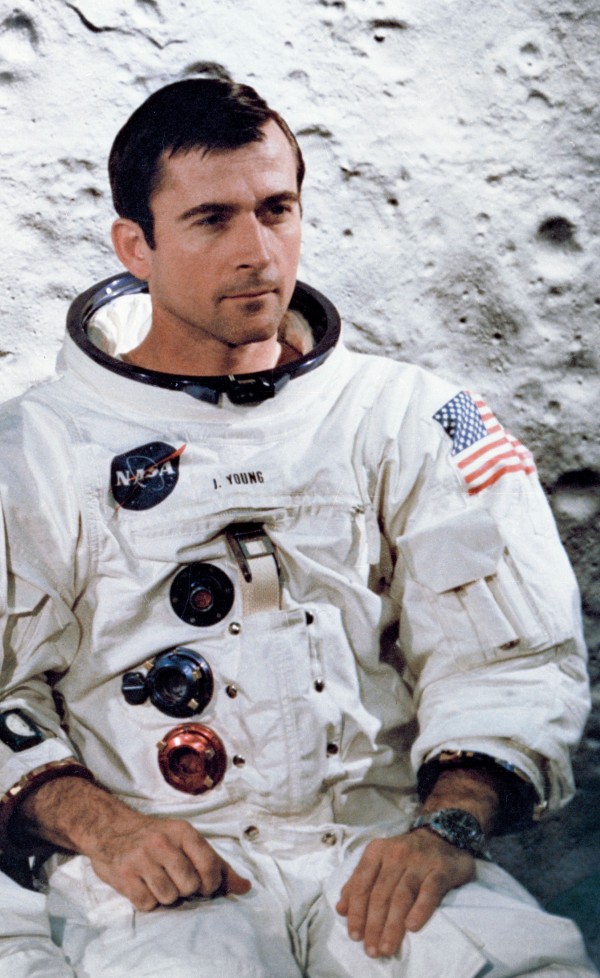 Astronaut John Young is one of the most decorated astronauts in history. With an astronaut career spanning more than 40 years, he flew twice, each, on Gemini, Apollo, and Space Shuttle missions, including the inaugural STS-1 shuttle flight.

But John Young also was a crew member aboard Apollo 16, where he would become the ninth person to walk on the Moon. Oh, and where he was compelled to indulge in a diet very, very high in potassium. In particular, in the form of orange juice. 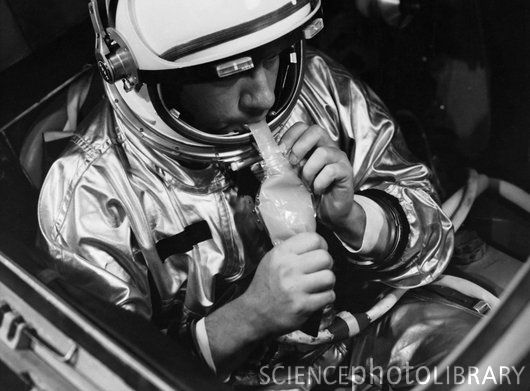 Now, John Young had a history with particularities about food. He became something of an astronaut folk hero for smuggling a corned beef sandwich on board Gemini-3 in 1965, but was wholly unprepared for the ingestion of such tremendous quantities of orange juice.

While I imagine that there are few astronaut experiences worse than dutch ovening yourself inside your own spacesuit, you can also imagine that the governor of Florida was not too pleased at a mic'd up diatribe against the signature crop of his state. Words, in fact, that John Young would have to answer for in an official Apollo 16 press conference:

I don't know whatever happened to the gases released by astronaut Young (and others), but if there's any methane on the Moon, you can be sure that this is where it comes from!
Tags
Random Stuff
spaceflight

Hahahaha!! Didn't know about this before :D Great piece of less known history of moon missions! Thanx for posting this.

By sheer coincidence I stumbled on this one on YouTube yesterday: http://www.youtube.com/watch?v=Uuv6TVv0r44

CanÂ´t say if itÂ´s real or not. Something about the sound bothers me.
And btw language warning.

I think this was discussed in Mary Roach's Packing for Mars. The sandwich incident was for sure.

I also remember at that time (Apollo 15) "Tang" was running big adds on TV claiming to be the orange juice of the astronauts. Maybe Tang bodily interactions were the methane source :)

This reminds me of another story. I don't recall where I read it.

Building the lunar landing module the plan was to build two of them, one for the actual mission, and the other one for the purpose of training and for comparisons if the astronauts on the Moon were to experience trouble.

As always with projects like this everything was way, way behind schedule. Engineers kept modifying the design, way after the point where the design was supposed to be frozen. More and more design changes were not copied in the second unit. Increasingly astronauts felt that practice sessions in the second unit were useless. One day, I read, on entering the second unit engineers saw that some astronaut had used a piece of string to hang down a lemon.

I tried a Google search, and I didn't find any lead to a creditable source.

The 'lemon' story may well be a myth.

Unfortunately (but inevitably) the story has been usurped by people who claim the Moon landings were faked. That kinda knocks out the funny side.

John Young was the same astronaut who got into trouble for bringing a corned beef sandwich aboard the first Gemini mission.

Best source I can find for the lemon story is here: http://www.solarviews.com/history/SP-4205/ch8-7.html . It was the Apollo capsule simulator rather than the lunar module simulator that was at issue.

All humor aside, "Humans produce two flammable gases: hydrogen and methane. Flammable gases accumulate in an enclosed space and can ignite. Astronauts are humans who spend lots of time in enclosed space. The logic is irrefutable. So, what's the risk to farting astronauts?"

"Several factors affect gas formation: 1) amount and kind of fermentable substrate; 2) abundance, types, and location of microflora; and 3) psychic and somatic conditions that affect the gut. We evaluated the first factor by studying men fed different diets and have also recorded influences of uncontrollable factors. One group of 6 men ate Gemini-type diet (S) and another received a bland formula (F), for 42 days."

Yes NASA studied flatulence. "The study, incidentally, was the work of Edwin L. Murphy and Doris H. Calloway, who was a brilliant, ground-breaking nutritionist."

"Their paper formed part of a loose trilogy of flatulence-related papers that the pair worked on, which kicked off with 1968's "The Use of Expired Air to Measure Intestinal Gas Formation" and concluded with 1971's "Reduction of Intestinal Gas-Forming Properties of Legumes by Traditional and Experimental Food Processing Methods." Truly, if you needed to know something about farting in the late 1960s or early 1970s, you went to Calloway and Murphy."

"Test responses were measured against a baseline derived from feeding a bland, low-residue formula diet. In the present study, mature, dry lima beans were found to be as high in flatulence-inducing factor(s) (FF) as are California small white beans... Soybean and mung bean sprouts appeared to retain most of the FF present in the whole bean."

The spinoff knowledge from NASA space program is g-astronomical.

Thanks Kevin for finding a good source for the lemon story

So it was about the command module, not the lunar module.