"It may be that ultimately the search for dark matter will turn out to be the most expensive and largest null result experiment since the Michelson-Morley experiment, which failed to detect the ether." -John Moffat

Dark matter is a puzzle that's now more than 80 years old: the presence of all the known, observable, detectable normal matter -- the stuff in the standard model -- cannot account for the gravitation of the astronomical objects we observe. But despite our inability to create or detect it in a laboratory, we're certain of its existence in the Universe.

The true test of this comes from colliding galaxy clusters, which show a distinct separation between all the known "normal" components, which collide, heat up and emit light, and the gravitational components, which very clearly don't. At this point, over a dozen distinct colliding clusters show this effect, from some of the smallest known galactic groups to the largest colliding cluster in the Universe: El Gordo. 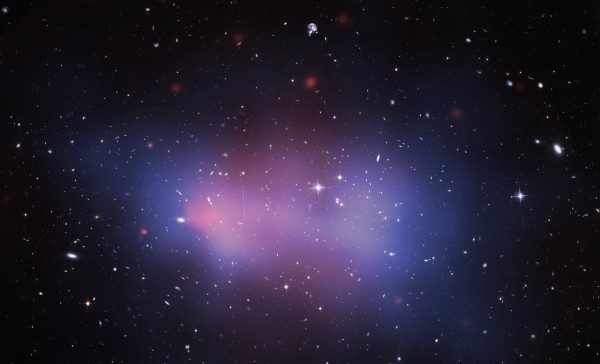 Come get the whole thing on Mostly Mute Monday!

“It may be that ultimately the search for dark matter will turn out to be the most expensive and largest null result experiment since the Michelson-Morley experiment, which failed to detect the ether.” -John Moffat Dark matter is a puzzle that’s now more than 80 years old: the presence of all the…

“And now we welcome the new year. Full of things that have never been.” -Rainer Maria Rilke Yes, it's true, with 2015 upon us, the new year holds a number of wonderful new things. Not only for us, but for the Universe as well! Image credit: Stuart Rickard of After Ice, viahttp://blog.after-ice.com…

“These galaxies are among the most massive galaxies in the universe and are believed to have rapidly formed their stars a long time ago. However, how these galaxies formed and why have they stopped forming new stars remain mysteries.” -Tao Wang, lead author on this new study There was once a time…

Why Do The Tiniest Galaxies Have The Most Dark Matter? (Synopsis)

“Men occasionally stumble over the truth, but most of them pick themselves up and hurry off as if nothing ever happened.” -Winston Churchill When we look out at the Universe on the largest scales, from large-scale structure to the fluctuations in the CMB to lensed clusters of galaxies and to giant…