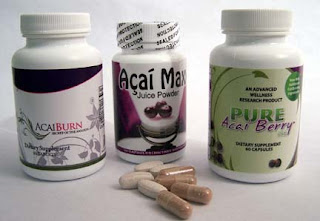 Photo credit: Jeff Cronin
In the recent past both Travis and I have taken a jab or two at the evolving acai berry craze, whether it was making fun of celebrities (i.e. Rachael Ray) who endorse it or by critiquing weight-loss products based on the magical berry (i.e. AcaiBurn). Apparently, we were onto something.

This past Monday, the Center for Science in the Public Interest (CSPI) has released a consumer warning, urging consumers to not fall prey to the viral ads of countless acai berry based products for weight loss, sexual dysfunction, cancers, and other ailments.

In the warning, the following is stated:

"There's no evidence whatsoever to suggest that aÃ§ai pills will help shed pounds, flatten tummies, cleanse colons, enhance sexual desire, or perform any of the other commonly advertised functions."

"If Bernard Madoff were in the food business, he'd be offering 'free' trials of aÃ§ai-based weight-loss products."

Aside from the lack of evidence backing any of the acai berry product claims are sketchy business practices of most of the companies peddling the products.

In fact, almost 3 months ago, the Better Business Bureau (BBB) had released their own warning concerning online sales of such products.

In that warning, it was said that the "BBB has received thousands of complaints from consumers nationwide who thought they were signing up for a free-trial offer of acai berry weight loss products that were supposedly endorsed by Oprah, Rachel Ray and other celebrities; in the end, the free trial cost them, month after month.

Apparently, the "free-trials" all these companies are offering, just like the AcaiBurn that I recently blogged about, can end up costing you quite a bit. In a scheme called "negative option", the consumer must log in a credit card number to receive the free trial - as soon as they do so, they unknowingly also purchase subsequent orders of the product for which they will be charged in the near future. And cancelling your subscription is apparently close to impossible (stories of being on hold for 75 minutes while attempting to cancel product purchase), such that the "14-day free-trial" can turn into a lifetime expense.

Additionally, various companies have also been setting up fake blogs, written by non-existent people touting the benefits of acai berry based products, particularly for weight loss. According to the CSPI report there are at least 80 different blogs written by different people, with all of them having the same personal before and after pics of their acai-berry body transformation. And who is the woman in the photo? It turns out she's a German model whose photo has been photoshoped to give a nice before and after comparison. Thus, Tara, Olivia, Alicia, Becky and others of " [Insert name] Weight Loss Blog" are all the same German model who was totally unaware her picture was being used to scam consumers into purchasing a bogus product.

Even more interesting, a recent study has shown that while acai juice is often touted to be the highest in antioxidants, it apparently pales in comparison to many other juices in its anti-oxidant properties such as grape, blueberry, and black cherry juice.

For future reference, if you come across a product that you are tempted to purchase, first check the BBB for a review of the company selling that product at http://www.bbb.org/ , where you will find a free online database with over 4 million reports on different businesses

Also you can check out this Fraud Alert written by the CSPI for how to ensure you don't get scammed by online health products which has a bunch of helful tips.

Doing the right thing for the wrong reasons two totally different ways: 1. NEWSFLASH! Gabourey Sidibe is fat! Boy I never noticed that before! I bet you all didnt either! I bet this is like, a divine revelation for Ms Sidibe, too. Thank goodness this fact is pointed out to all of us! Look,…

Another irony meter blown: Dr. Oz to testify in front of the Senate's Consumer Protection panel about weight loss scams

I've never made it much of a secret that I don't much like "America's doctor," Dr. Mehmet Oz. Just enter his name into the search box of this blog, and you'll find quite a few posts in which I deconstruct some bit of quackery that Dr. Oz has promoted on his show, be it his promotion of faith…

A few weeks ago Peter wrote about the Acai Berry Scam, and reader izzlecanoe made an interesting comment: But I do find it annoying that alongside your posts are advertisements for the very products you are exposing. Can science blogs be persuaded not to allow advertising from such woo pushers.…

"There's no credible evidence that what's in Airborne can prevent colds or protect you from a germy environment," said CSPI senior nutritionist David Schardt, who reviewed Airborne's claims. "Airborne is basically an overpriced, run-of-the-mill vitamin pill that's been cleverly, but deceptively,…

Aha! I have trendier friends who've commented on wanting to try some of the Acai stuff. I'll be sending them this link before they waste their money.

Great post. I get so sick of seeing those ads online. Hopefully more people will now realize it's a scam.

No surprise here ... they've learned from Big Pharma. Got osteopenia? You might want to check out this NPR story - http://bit.ly/cqgOdX.

Great post. But I do find it annoying that alongside your posts are advertisements for the very products you are exposing. Can science blogs be persuaded not to allow advertising from such woo pushers.

You're absolutely right. We've started to notice these types of ads popping up on the site lately. Ironically, those ads are the very reason why we never used Ad Sense back when we had our own site at www.obesitypanacea.com. I've sent some emails to the people in charge of the site, and hopefully we can get them taken down.

Those phony ads are infuriating. And it's even more disappointing when they appear often on many of my favorite news sites. When a news site carries lying advertisements, it takes away from the credibility of their news stories.

Though it would obviously be great if these ads for time and money-wasting schemes were not carried on reputable sites such as Science blogs, most good web browsers either come with a tool that can be used to block ads or can provide this facility through an add-on.

I've spoken with the upper-ups, and the weight loss ads are being pulled ASAP. I've noticed a few this morning, but I'm hoping that will end very soon. Give it a few days, and if you still notice the ads on our blog or any other ScienceBlog, take a screen capture and email me so I can pass it along to management.

Know what you need to do to be compliant and avoid the risk while Translation Medical Insert, Translations Medical Insert and gain the perspective and position of a medical device industry expert.

This product works. Myself and my wife have used it several times and we were amazed with how it works and i cannot stress it enough.I strongly recommend this product to anyone

You were onto something, eh? A couple of obnoxious PhD pretend know-it-alls. Mehhh! Acai berry products may be fake, but then so are you!

WOW: ART: I guess you don't like PhDs because they are way smarter than you. Too bad.

I have heard it worked but have never tested it

I've tried it, but I did not purchase it online. Wasn't that stupid. I went in to a local health store and I've been using it. It definitely helps boost metabolism and I have lost weight, but I've also been working out lightly so that helps as well.

It's a matter of finding someone not out to scam money out of you.

Does anyone know of anyone who actually has had sucess with this? I have seen the sites as described above and I cannot believe the fcc lets them get away with that

is there any police'ing at all on the net. anybody watching cyber thieve's. this stinks of wall street and friends. hope some folks get the picture.

Wealth and Obesity: A Bolivian Perspective

July 9, 2010
As our regular readers will recall, my partner, Marina, and I are travelling for the summer throughout South America as a means to celebrate the successful defense of both of our PhDs (Read about our travel adventures and reflections here). I know things are hitting the fan at SciBlogs with the…

June 25, 2010
As our regular readers will recall, my partner, Marina, and I are travelling for the summer throughout South America as a means to celebrate the successful defense of both of our PhDs (Read about our travel adventures). Many people often take holidays to relax and unwind from the stresses of their…

June 9, 2010
As our regular readers will recall, my partner, Marina, and I are travelling for the summer throughout South America as a means to celebrate the successful defense of both of our PhDs (Read about our travel adventures). Last week I discussed the dietary habits on the Galapagos islands. This week I…

May 31, 2010
(Photo by Marina Komolova) As our readers may have noticed, Travis has been solely carrying the Obesity Panacea load, while I have been a bit absent since my PhD defense. As some of you may know, I am taking the summer off to travel through South America with my partner, Marina, who also just…

The Fatter we Get, the Less We Seem to Notice

May 21, 2010
Does this look "normal" to you? A significant number of overweight and obese individuals believe their body weight to be appropriate or normal and are satisfied with their body size. Misperception of overweight status is most common among the poor vs wealthy, African Americans vs white…