Eureka! It's a Talk!

Kate and I had a very nice time doing touristy things in Bath yesterday during the day-- old church, very old hot spring, Georgian architecture-- then went on to Bristol where I gave a talk on the forthcoming book, as you can see in the picture above. I would ordinarily include a SlideShare link to the slides I used for the talk, but the talk is so image-heavy and the hotel wi-fi so grindingly slow that I'm not even going to attempt uploading it.

The first bit, as you might guess from the photo above, was basically the same as my TED@NYC talk last fall, making an analogy between the development of quantum physics and the solving of a crossword puzzle. Of course, that was only six minutes, so I added two more analogies, between doing astronomy and playing bridge and between the science of timekeeping and playing football (we'll defer to the linguistic preferences of my gracious hosts). That last bit included a fake Lukas Podolski quote, a cheap Wayne Rooney joke, and a gratuitous Luis Suarez .gif, all of which went over about how I had hoped (which is nice, because that was the riskiest part of the talk).

As is often the case (the TED@NYC thing was a rare exception), the talk as delivered was a lot different than the text I had typed out, with a few on-the-fly additions. I think it went well, though, and the audience response was very positive (always a good thing when giving a talk for the first time). After the talk, we had a very nice dinner with folks from the IOP, and then caught a series of trains back to our hotel on the fringes of London; we had feared we would miss the last Tube trains, but aside from one close call with a janitor prematurely closing a security gate, we made it back without incident.

So, a very good, but very long day. Worldcon starts today, and I'm doing a Kaffeeklatsch at 6pm (if you're at the con, come by...). We may squeeze in a little more tourism in the morning, because the program before coffee is kind of light on stuff I want to see, but we'll be around. If you're in London, say hi. 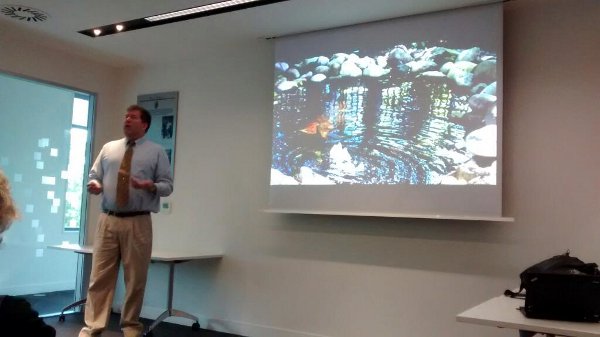