Today is SteelyKid's seventh birthday, which she's been counting down to for a good while. It's a little hard to believe it's seven years since she was substantially smaller than her stuffed Appa toy.

She's become quite a handful in that time, with boundless energy apparently derived from photosynthesis (since she hardly eats anything), and intense interests in Minecraft and Pokemon, math and taekwondo. She's a red belt now, which is only a few short of black, and this summer has started doing the "Elite Team" sparring classes. I'm pretty sure that if she really wanted to, she could kick my ass. Happily, she's generally good-natured. This is also a Good Thing because she has an amazing ability to talk her friends into doing what she wants...

We're having the annual blowout birthday bash at the house tomorrow-- a bunch of her friends from school and day care, a rented bouncy-bounce, and junk food. Presents from family have been trickling in over the last few days-- last night she got a geocaching starter kit from her awesome California aunts, and it took a bit of work to stop her from heading out immediately to look for hidden treasures. This morning, I got her up a little earlier than usual to check out her new science toy: a telescope. She wanted to spend her allowance money on a small refractor on a wobbly mount from the local science museum, but that slightly offended my real-scientist sensibilities, so I promised her a better one as a birthday gift. Many thanks to astro-blogger extraordinaire Ethan Siegel for suggesting the Celestron Firstscope, which is pretty much exactly what I wanted-- simple enough that she can figure it out, stable enough to give a good view (though I may look at screwing a plate on the bottom that would let me put it on a camera tripod rather than a patio table...). 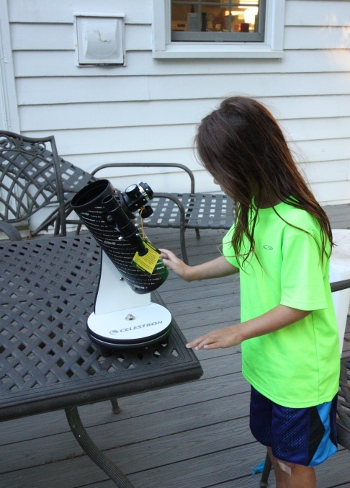 SteelyKid with her new telescope.

The Moon is currently pretty high up right at the time when we normally wake her up, so I got it set up and brought her straight outside, where she was duly impressed. I got the accessory kit as well, so it has four lenses, and we tried out two; the image quality is really good, but way beyond my ability to photograph-- I got one hold-the-phone-by-the-eyepiece shot with the wide field lens, but the higher magnification eyepiece is too small for my unsteady hands. Nice view of mountains along the terminator, though. I'll be looking for good early-evening targets to point it at in the next few days; suggestions welcome in comments.

(The Pip also demanded a look, so we showed him both. "Yep, that's the Moon," he said of the wide field, and "That's part of the Moon" for the higher magnification. He's a very practical Little Dude.)

Anyway, it's been a fun ride for the last seven years ("SEVEN! YEARS!" in the mode of Jeremy Piven from Grosse Point Blank), and she's pretty awesome. We'll keep her for a while longer.

We did have a hint of things to come last night, though. On the way home after Elite Team taekwondo, she asked "Dad, when can I get my own phone?" And so it begins...

Happy birthday to SteelyKid! Do you still have the Appa, just in case?

In re: the phone request, we gave our daughter the iPhone she had been coveting for her 11th birthday. She's starting 6th grade this fall and will be getting herself to and from school, so there were practical considerations that went into this. Some of her friends already had phones, but to the best of my recollection they were also all 11 or just about to be when they got them. So if it helps, tell her that Some Dude On The Internet said that 11 is a good age for a phone.

Very cool, Chad! Glad it was a good gift and hope she gets a lot of enjoyment out of it.

Also, that is an awesome Appa. I loved Avatar: TLA, and I don't even have kids!

I don't know if you are into camping, but if you are, definitely do this. The night sky is really that much more impressive if you can get away from city lights. The nearly full moon is also quite bright; I have managed short walks through the woods (near my house, on a trail I am very familiar with) by moonlight. (While carrying groceries: the trail in question is the fastest way from my house to the grocery store.)

You might get a kick out of trying to look for these things, from my friend's blog: https://10minuteastronomy.wordpress.com/complete-list-of-missions/ They're all doable in 10 minutes or less, so should fit kid patience limits, and are a good way to get comfortable with the sky.

Firstly, a happy birthday to SteelyKid.
If I had a recommendation for the FirstScope, it's spend a little on decent eyepieces.
I have a couple of ok ones and put them on the FirstScope and it was a major improvement.
It's a great little scope that I can put in the back of the car (unlike my 8" dobsonian) and take out to Scout/Guide events and show people stuff on the moon. It's not big enough to get Saturn properly. That was the eye-opener for me with the big scope.
I'd brace yourself for spending a lot more time in odd locations with geocaching. Having said that, it's a lovely hobby that can go around the world.

Happy Birthday, SteelyKid, and consider this another vote for an Appa comparison. The early photo series of you was a fantastic idea.