The Evolution of a Sad Balloon

A few years back, I did a couple of posts on the physics of a sad balloon (that is, a helium balloon that can no longer lift itself up to the ceiling), the first on simple buoyancy, the second on how long it takes for the helium to leak out. These were based on only a couple of data points, though, and it's always risky to extrapolate too far from just two points.

Of course, in a house with two kids, we have helium balloons show up with some regularity, and SteelyKid's birthday this year provided a bounty of them-- four shiny Mylar balloons, bearing cheerful images of Scooby-Doo, some cartoon dinosaurs, Batman, and Pokemon. The Batman one was slightly larger than the others, and the Pokemon one was very quickly taken upstairs and tied to SteelyKid's door (so quickly, in fact, that it didn't make the photo with the others), where it suffered slightly less abuse than the other three, which were batted around every night until they deflated to the point where that wasn't fun any more. 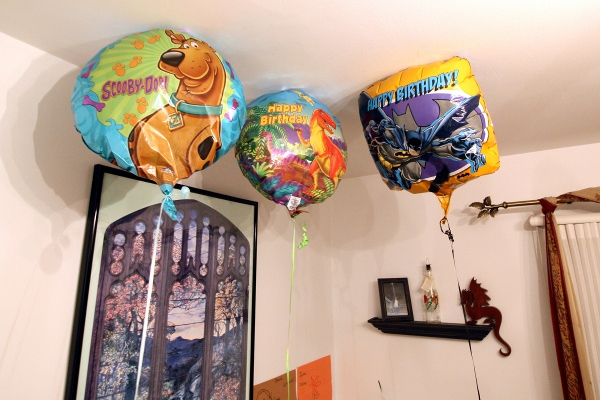 Three of the four colorful Mylar balloons used in the experiment.

This provided an excellent opportunity for a longitudinal study of balloon evolution, as measured by lifting capacity. Roughly once a day, I would chain together a bunch of paper clips (the mass of 27 clips, as measured by SteelyKid's balance scale, was 9 grams, so a third of a gram per clip) and hang them from the balloon. Then I would remove clips from the chain until we achieved at least neutral buoyancy-- that is, if I moved the balloon down slightly, it would either stay where I released it or rise back up.

So, what did I find? Well, it's not science without at least one graph: 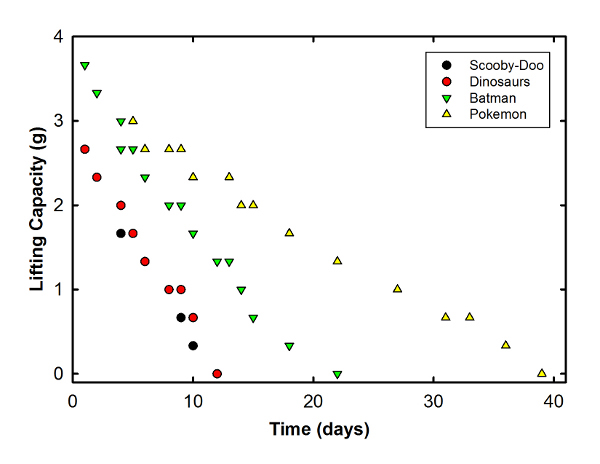 Lifting capacity of our various balloons over time.

This shows the maximum weight supported (in grams) over a bit more than a month following SteelyKid's party. The longest-lived balloon was the Pokemon one that made it to relative safety upstairs (about 40 days before it couldn't lift a single paper clip), followed by the Batman one, which started with slightly more gas than the others. The Scooby-Doo and dinosaur ones took a pounding and succumbed relatively quickly.

That's a much shorter lifetime than my estimate from 2011, which largely reflects the higher level of kid activity-- back then, The Pip hadn't yet been born, and SteelyKid was only three. With a three-year-old Pip and a seven-year-old SteelyKid in the house, the balloons absorbed a good deal more abuse.

The one thing I found surprising about this was just how straight those lines are. I was kind of expecting to see some curving-- a more rapid drop at the start, when the pressure inside the balloon is higher, then a longer tail-- but these are pretty darn linear. On reflection, I think that makes sense-- while the initial pressure is clearly a bit higher than atmospheric pressure, it can't be a very big difference, and the final pressure can't be any lower than one atmosphere, so there's just not enough of a difference to change the rate. Thus, the helium diffuses out at a fairly constant rate, and these curves look straight.

So, there you go, some birthday physics. For homework, estimate what pressure you would need to fill the balloons to in order for the helium to stop being a lifting gas, and speculate about what you might make such a balloon out of. Send your work to Rhett for grading.

I'm currently helping support a survey of blog readers as part of Dr. Paige Jarreau's research on science communication. If you read this or other blogs regularly, please take a few minutes and complete the survey. It's for SCIENCE!

Looks like a transcription error in the process description - "the mass of 27 clips, as measured by SteelyKid’s balance scale, was 27 grams, so a third of a gram per clip".

An editing error; I started to put the mass and number in one order, then decided it would be better the other way around, and only half fixed it. It's fixed now.

I read somewhere that helium is a non-renewable resource, and our descendants will curse us for wasting it on balloons for children. This did not stop me from inflating our remote control shark, but I wondered if you had an opinion.

Maybe try some rubber balloons for comparison? If the errorbars aren't too large, these might show the pressure-dependence better.

I have one of these balloons in your image (not sure what they are called), it doesn't contain helium though, just plain old air. But the remarkable thing about it is that I've had it for 20 years and it still doesn't leak!