After the trip to my parents' for Christmas, I flew down to Charleston, SC to attend the Renaissance Weekend (though none of it fell on an actual weekend day...). This provided some much-needed stress relief, but was not great in photo-a-day terms, as it's a strictly off the record event, so I couldn't exactly photograph sessions I was in or anything like that. But it does provide another nice set of breakpoints to define a collection of catching-up photos, including one bonus shot to make up for the missing day in the previous set.

The traditional thing to do when on the road is to take a shot out the hotel room window, but that was spattered with rain and facing the sun when I got in, so I couldn't get anything useful. So here's a photo of my hotel room, instead. 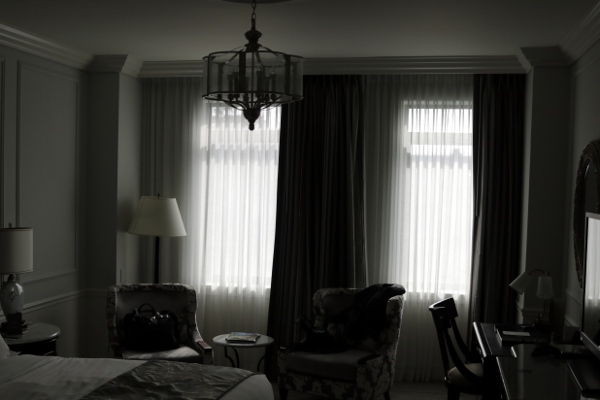 My room at the Belmond Charleston Place hotel.

This included "turn-down service," which is one of the more baffling features of high-end hotels, to me. One day, I was taking a nap when they came around, and they left a note on the door saying "We saw the 'Do Not Disturb' sign, so didn't come in; let us know when you leave so we can do the turn-down service." And, honestly, I can't imagine why I would bother-- I mean, what's the point of coming in to make the bed I was just napping in, so I have to un-make it again when I come back to go to sleep?

You get three crappy cell-phone photos in this set, because as noted above, I couldn't really bring my fancy camera to the meeting. This is the crappiest: 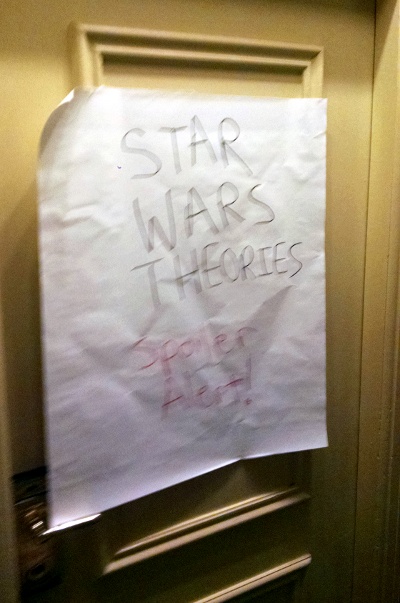 I do appreciate that they made the effort to warn people. I didn't go to the session, though, so I can't say what they had to say about the movie (which I enjoyed, but not in a way that led to anything especially bloggable).

The Belmond sets up an elaborate train display between the two big curving staircases in the lobby during the holidays. 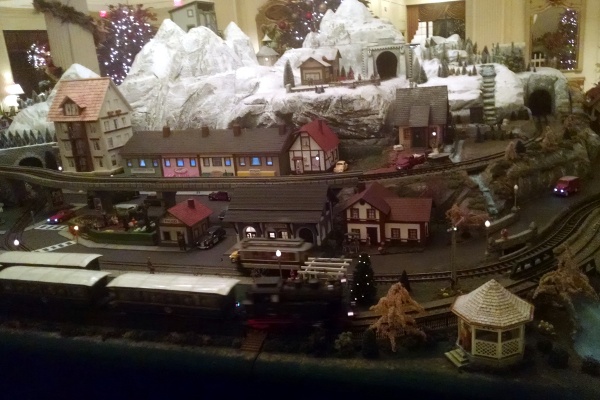 I have no idea what they do with this space the rest of the year, but these are kind of cool. I have a similar shot with the DSLR from another day, but it's not all that dramatically better than this one.

On New Year's Eve the Renaissance Weekend takes the afternoon off for "lunch on your own" prior to an earlier dinner than the other nights. I grabbed some BBQ and wandered around Charleston with my good camera for a couple hours. It's a beautiful city, but has one significant issue: 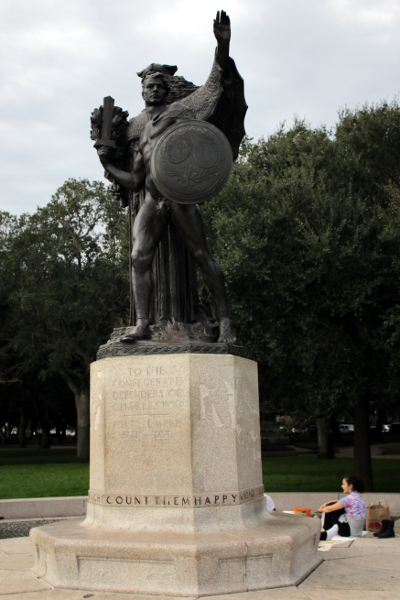 Statue honoring the Confederate defenders of Charleston, in the Battery park.

This is a statue in the Battery, done in that tacky 19th century public art style. It's not really my thing, but it functions as a good representation of the problem with Charleston (and pretty much any other old city in the Deep South). The inscription on this honors "The Confederate defenders of Charleston," for managing to keep the city from being overrun (though as I noted in last year's recap, Sherman probably could've put the place to the torch if he'd really wanted to).

And, you know, that raises some major issues for a Yankee like me. After all, in the strictest sense, those men were traitors, fighting in the service of a would-be nation that richly deserved to be driven down, in support of a monstrous institution that was the cause of unimaginable human misery. I'm not too thrilled about maintaining public monuments to such a reprehensible cause.

On the other hand, many of them were also ordinary folks defending their homes and families from what would have been horrific devastation had the Union actually taken the city. You can't really fault them for that, insofar as it's separable from the whole Confederacy thing. And what's more, it's at least in part thanks to their efforts that downtown Charleston is the beautiful and charming city that it is-- the many buildings that pre-date the Civil War probably wouldn't still be standing had it not been for those defenders. That's arguably an accomplishment worth honoring; at the very least, it's not easy to wish that they had been much less successful.

So, you know, it's complicated. Still not sure where I ultimately come down on this, but I will say that all the locals I interacted were extremely nice. As is typical of the South, which makes it harder to hold their ugly past against them...

To make up for the missing photo from the last batch, and also that awkward turn into heavy politics, here's a pretty picture of a fountain: 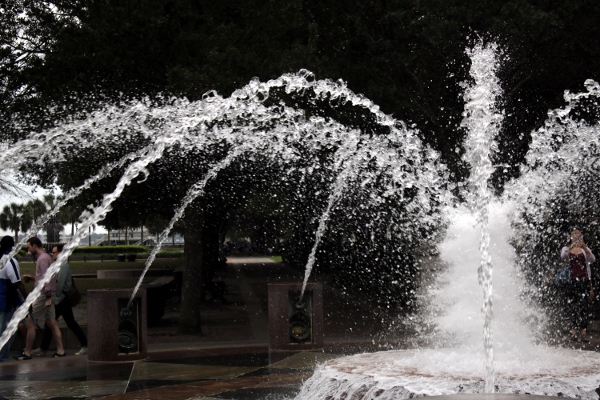 On the way home, I had a long layover in the BWI airport, which was a good thing because the service in the new pseudo-pub there was amazingly slow. To lift JFK's line about DC, it offered Northern charm and Southern efficiency. This did, however, allow me to see a cool sunset out the window of the restaurant: 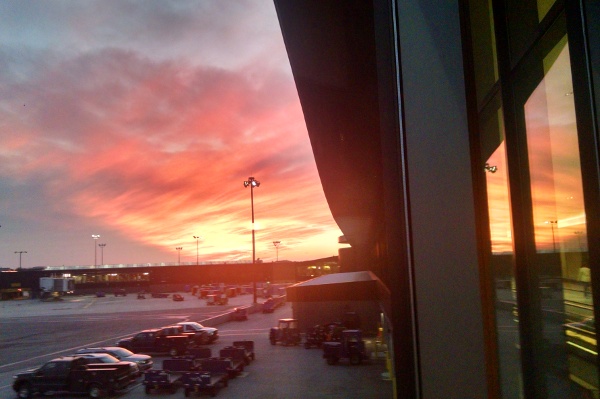 Another crappy cell-phone photo, alas, because I didn't feel like unpacking my camera bag to get a better shot.

And those are the photos from my trip to Charleston. There will be one more multi-image post to get things back in synch, later tonight. And then it will be back to the usual procedure, at least until the next time I take a multi-day trip out of town...