We took a rare long weekend to go to a family party for Memorial Day at my parents' (Kate and the kids always get the day off, but I usually have to teach; this year, I'm doing a team-taught class, and the other person was willing to cover my Monday spot), thus the lack of a weekly update post. The delay, however, allows for some quality nerd-parenting content, so it's a win all around...

SteelyKid's third-grade class has been doing long-ish projects approximately monthly through the year, and the May project was to design and make a board game based on a book. SteelyKid picked the Bone graphic novels, which she and a bunch of her classmates tore through earlier in the year, and she finished the game early this week. She's very proud of how it came out: 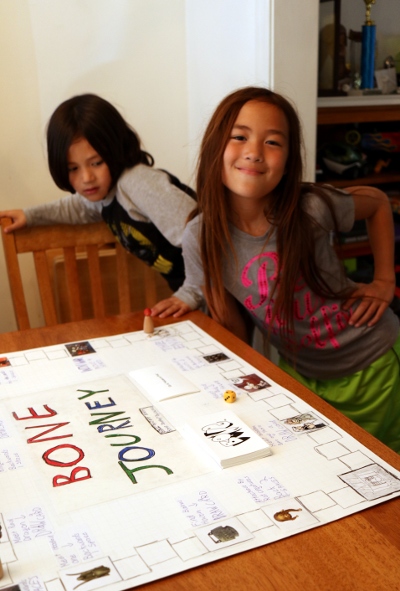 SteelyKid mugging with her board game.

This is not without justification, as she put a lot of thought into it, and it came out really nicely: 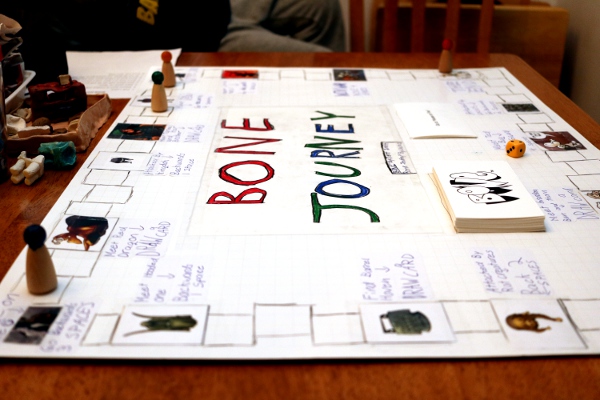 SteelyKid's board game based on the Bone graphic novels.

(Obviously, she had a bit of help from us in finding and printing out images from the books, but the concept and general design are all her...)

We play-tested it last night, and The Pip won the first game, with SteelyKid coming in second. She's taking it in to school today, and very excited to show it to her friends.

And so the Little Dude isn't left out, he has also provided some quality nerd-parenting moments. SteelyKid's work on the game pushed well past bedtime on Tuesday night, and The Pip was getting restless, so I offered to go upstairs and read with him. To my surprise, he accepted enthusiastically, mostly because we've started reading the Dragonbreath series by Ursula Vernon.

SteelyKid read these a while back, and I've been jokingly calling the kids "Cousin Spencer" whenever they critique my playing of video games. The Pip is old enough now to get the books, so we started the series, and he was very fired up for it. I have him read the dialogue bubbles on the comic-style pages that are scattered through the books, and I read the regular prose sections. We finished the first book last night, and he asked me to go get the second volume from SteelyKid's room, even though we weren't going to start it right away, just so he could see it and have it in his room for tonight.

The Pip started kindergarten at a lower reading level than SteelyKid did for a variety of reasons, chiefly that his birthday is three months later in the year than hers, so he was starting younger. He's made remarkable progress, though, and is very smug about being a couple of reading levels past the goal for the end of the year. This has largely been driven by reading guidebooks about Pokemon and, more recently, Skylanders, which has done wonders for his reading but is not a real thrill for whichever parent has to read lists of character attacks to him at bedtime. Broadening his literary interests to some quality books with actual plot is a huge win.

So, it's been a good week for nerd parenting. And now, I have page proofs of a couple of forthcoming things to review, so I need to go somewhere with no wi-fi for a while...

Vernon has a new series out as well, Hamster Princess, if the Pip wants to have his own set of books.

I remember insisting that we take turns picking the read-aloud during the Pokemon craze. It did mean that my children could count by tens at a very young age because they played the card game a lot.