Weekend Diversion: What English Sounds Like to Non-English Speakers

"So when the cat has got your tongue, there's no need for dismay!
Just summon up this word and then you've got a lot to say!
Pick out those eighteen consonants and sixteen vowels as well,
And put them in an order which is very hard to spell..."
-Supercalifragilisticexpialadocious, The Sherman Brothers

There's something mysterious about foreign languages that we do not speak; the word barbarian comes from the ancient Greeks, who thought that the speech of the Medes and Persians sounded like "bar bar bar" to them. While we might be quick to dismiss such sounds as gibberish, Italian entertainer Adriano Celentano had another idea back in 1972, when he recorded his song Prisencolinensinainciusol. Deliberately written to sound like American English gibberish, but with no recognizable words (except the occasional "All Right"), this is definitely an entertaining way to spend four minutes on a Sunday.

Although it comes in many versions, the above is the most entertaining for me. And is it just me, or is anyone else watching this reminded of Edward James Olmos playing Jaime Escalante in Stand and Deliver? 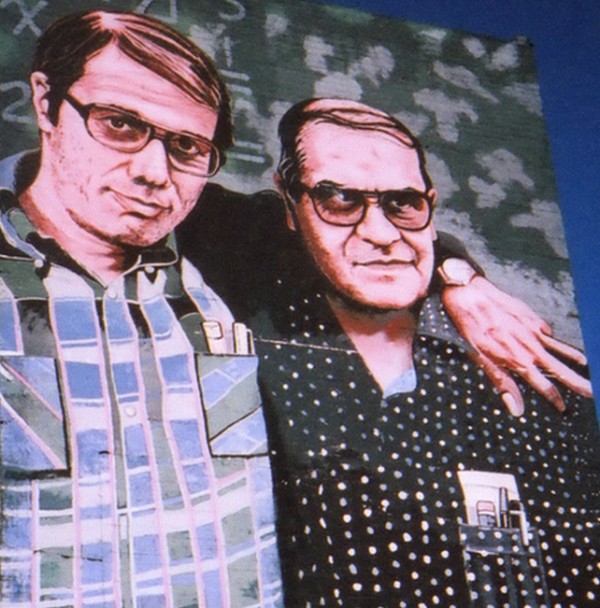 However you spend it, have a great weekend!

Ethan, I also suggest you to check out the "grammelot", especially Dario Fo on "Mistero Buffo". Quite an art! :)

Fantastic, thanks for that. I've seriously spent a significant amount of time wondering what English sounds like to non-English speakers. I've tried to think of ways to get an idea, nothing as wonderful as this has occurred to me.

About 20 years ago in Poland english resembled speaking with a mouths full of potatos. There is even a polish commedy in which speaker at airport comunicates sth. in polish and then she eat potatos and translate the communicate for english (the title was "Mis" what means tedybear).
That was beacouse there was almost nobody speaking english in Poland so it was very exotic language. Especially that it was comming from "The West from the other site of the iron courtain". And - ofcourse - the goverment accepted only russian language in schools (english was enemy language. Even then I think that everybody should speak enemy language just in the case but communistic goverment was very stupid")

Now there is a lot of people speaking english, so it's not exotic language for Poles:) And nobody thinks it sounds like speaking with a mouths full of potatos:)

This.....is so weird. i am suddenly overcome with a plethora of emotions. Ive never felt so, out of place hahaha. You know when you say a word over and over again until it sounds weird? and you get a laugh from it because you're perplexed by the language? thats what happened to me now, times 100,000 lol.

Alberto Sordi did a great movie, 'An American in Rome' (1954), where he speaks what he thinks is 'Americano'. I'd bet that Celentano got the idea from him.
BTW, Celentano is also in 'La Dolce Vita', singing his 'Americano rock n roll'.

I've always thought Norwegian sounds particularly like English, given I don't know any Norwegian. This is a video of Kaizer's Orchestra, a Norwegian band.

Mondegreens are a well-known phenomenon in English: somebody (often a child, but sometimes an adult when the song isn't clearly enunciated) hears a lyric as something other than what the songwriter intended. Among the most famous examples: "'Scuse me while I kiss the sky" (from "Purple Haze" by Jimi Hendrix) becomes "'Scuse me while I kiss this guy." For people who don't know the language at all, I could see a mondegreen effect on steroids, as this song illustrates.

The same goes if I'm hearing a language I am not very familiar with. The bridge of "Psycho Killer" by Talking Heads, which I believe is sung in French, sounds a bit like this song to me.

Kinda interesting. becuase in Armenian ( a culture that was very close to the medes and persians and is close today to greek cuture) the word 'bar' meand word.

Curious coincidence, I was just thinking a lot yesterday about how it is easier to fake accents while singing as opposed to speaking. The singing puts some constraints on the sounds you can vocalize

"I think that everybody should speak enemy language just in the case ."

Profound wisdom,, and I don't think I have ever seen it put so well.

As an italian, I really love some sentences in "kind of" italian that can be heard in some TV series (first example that comes to my mind is the beautiful Boardwalk Empire). I suggest you also this funny old band that used to sing in neapolitan language trying to match the english sound as much as possible: http://www.youtube.com/watch?v=UydnWk41QEo It's kind of a "benny lava" applied live to the Beatles, quite funny even if it's nearly impossible, even for most italians (as for me), to understand what they actually say (then I guess it would be possible to continue re-dubbing it in other languages forever...)

“I think that everybody should speak enemy language just in the case .”

While I understand the reasoning, I'd prefer everybody trying to understand the "enemy" and put him/herself in the position of the enemy. If the enemy did the same, maybe there wouldn't be as many enemies then...

As for the communist authorities in Poland (and other Communist countries) back then, if they let the people learn English, even as "the language of the enemy", most people would probably have had the opportunity to learn how the life on the other side of the iron curtain is, and start to resent communism.

For a funny counter-example, check out series 4, episode 4 of "The IT Crowd," where Jen lies about knowing Italian and then tries to fake translate for a visiting potential investor.
http://www.youtube.com/watch?v=_lWD4OG5sZM&feature=colike

Mirek is an idiot full of lies (actually I guess he is young and brainwashed by today's propaganda).
You could learn English in socialist Poland if you wanted to, even in elementary schools (the problem was lack of teachers, cause English is Germanic and Russian is Slavic like Polish = 100x easier for Poles). My cousins in bigger cities had Russian (yes, it was mandatory) and English classes at elementary school. In high school you could choose English if your school offered it in its curriculum. Other popular languages to choose from were German and French.
You had US and British movies in theatres (with subtitles). You had English speaking movies on TV (mainly with a reader).
Most of the music played on the radio was in English, like in Western European countries.
So to describe English as exotic is ridiculous. (actually I guess you didn't understand that movie, Mirek)
And to Tihomir: English was mandatory in Soviet schools !!!

It's a bit late to necro a thread just to throw your panties in the ring, Jebac.

Whether you're right or not, it's a bit late to make anyone care now.

Actually all the words are English words.
It's nonsense but it's made of English words. See
https://www.youtube.com/watch?v=9EsTeKt134o