Discovery, by nature, has a ripple effect. When one thing is found to be plausible, testable, or true, a suite of potential other truths and plausibilities tend to follow suit. This is the nature of inductive reasoning, the foundation of the scientific method, and the reason why science–as a human project–is generational. We discover something unexpected, and we celebrate twofold, threefold, and morefold, because its nuances and implications can ebb outwards, often lending hope to scientists working in entirely different fields.

Take the recent discovery of life in Lake Vostok, for instance: not a lake in the normal sense, Vostok is an underground Antarctic water reservoir, isolated from the outside world for 15 million years, a time-capsule long untapped. It has long been a question mark for science, a sort of myth. Dare we unseal this vault? In doing so, would we contaminate one of the last untouched places on Earth? Lake Vostok is, in essence, a frozen crypt, blocked from the sun by 4,000 meters of ice, laden with pressure, the coldest place in the world.

And yet, as we seem to discover with all our planet's most forbidding places, it harbors life. Over 3,500 DNA sequences, in fact, suggesting a complex ecosystem of relatively ordinary organisms, the type we might find in the bodies of fish and crustaceans, or in lakes and oceans around the world. "The bounds on what is habitable and what is not are changing," wrote the lead scientist on the genetic study of the Vostok water sample. 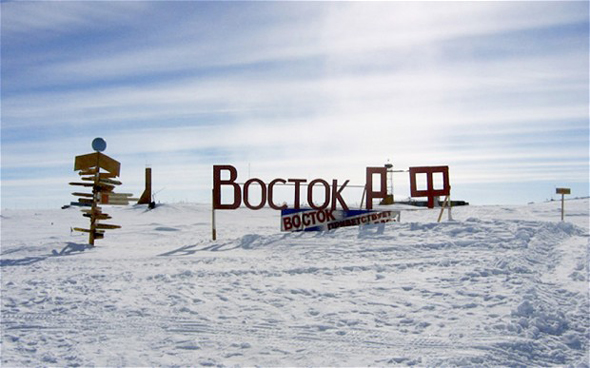 The ripple effect is this. Lake Vostok is a mighty fine analog for another seemingly inhospitable place for life: Jupiter's sixth moon, Europa. So this discovery of life beneath the ice is being welcomed not just by planetary biologists, but astrobiologists too. It might seem like a stretch to compare a frozen lake on Earth to a hunk of rock 390,400,000 miles away, but it's not rare for scientists to draw from Earth findings in making assumptions about space. Astrobiologists often study Earth's extremophiles–organisms which thrive in extreme conditions like hydrothermal vents, acid lakes, and deserts–snooping out their environments and evolutionary pathways, in order to understand how such life might evolve elsewhere in the universe. Finding microbes that can survive the glacial embrace of Lake Vostok, hidden away from the sun, provides clues about other, similar environments. Like, improbably, an alien moon.

Beyond any scientific purpose, Vostok to Europa is a tantalizing parallel to make. For one, comparing a place on Earth to an outer-space ocean serves to remind us how strange and wonderful our planet really is. It recontexualizes us. All of the aliens on Earth, from deep sea creatures to strange microbes, and maybe the conscious bipeds too, look different through this lens. As for the ocean on a faraway moon, both recognizable and horribly, horribly strange–it's just the kind of uncanny setting we love to create myths and fantasies about. To wit: the science-fiction film Europa Report, very recently released on demand, runs with the notion of subglacial life, launching its international cast across the solar system and onto Europa's harsh, sulfurous surface, where they discover, at great cost, the slumbering mysteries looming beneath. Hint: they're not microbes, unless those microbes were dreamt up by H.P. Lovecraft.

Europa's mystique might also have a little to do with its star turn in the kinda-underrated sequel to 2001: A Space Odyssey, 2010: The Year We Make Contact, in which a cryptic final message is transmitted to Earth:

However, the recent media coverage (and science fiction) regarding Europa/Vostok ignores something important: of these two desolate places, we are asking two very different questions. We know that Lake Vostok, some 35 million years ago, may have been open to the air, surrounded by a forest, and relatively warm. In boring through its icy ceiling, no one was trying to discover whether life could have arisen there, only if it could have survived the changes since its temperate origins. On Europa, that's not a distinction we have the luxury to make–under its hulking ice, survival and existence would be compounded into a single discovery. 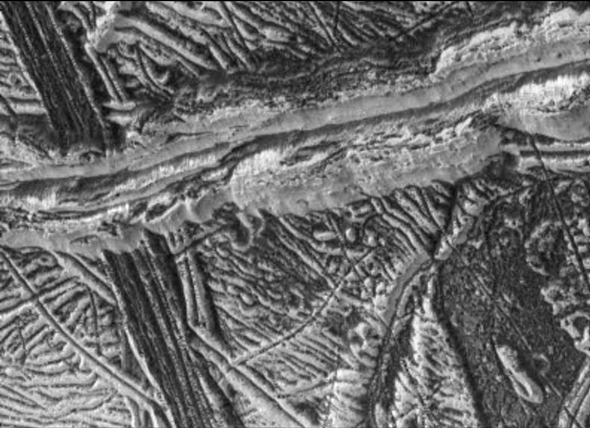 And what a discovery it would be! My friend, the writer & scientist Fred C. Adams, once speculated to me about creatures trapped beneath Europa's ice, completely ignorant of the vast cosmos above and around them, blind to the stars. Imagine breaking through to such a hidden world. It would be a first contact of the purest order. It reminds me, too, of Carl Sagan's loopy imaginations, in the opening chapters of Cosmos, of lifeforms that could exist on a gas giant like Jupiter. Billowing like jellyfish, the size of cities, they'd ride the buoyant gases of the Jovian atmosphere, eating the sun. "Physics and chemistry permit such lifeforms," Sagan wrote. "Art endows them with a certain charm. Nature, however, is not obliged to follow our speculations."

ALL THESE WORLDS ARE YOURS EXCEPT EUROPA ATTEMPT NO LANDING THERE.

Yes! Entry amended to include this crucial 2010 reference.

A quick glance at the PLoS One article can be summarized as: It appears that the composition of life detected under the ice, is similar to that which occurs in other environments on Earth. Surprisingly, there was evidence not only of bacteria and suchlike, but also of multi-celled organisms.

The multi-celled organisms were something of a pleasant surprise to me. This is where I'd expect to find a greater degree of divergence from species observed in other types of environments.

What we still won't know until we find life elsewhere, is whether the chemistry that is universal in Earth life (notably DNA as its heritable information storage mechanism), points toward some kind of universal convergent solution, or only a local adaptation, one out of many.

A quick glance at the trailer for Europa Report suggests that Hollywood has again done us the disservice of creating alien monsters, even if the technical details of space exploration are correct. A more realistic rendition would have been to stick to bacteria and simple multi-celled organisms, and close on a note of high hopes for further discoveries. I'll probably go see it for entertainment and to support having more science fiction in the cinema, but where today are we going to find our modern equivalents of 2001 and 2010...?

It turns out sometimes I can't spell my own last name, so if you are able to, please correct it in post #1.

I'm just a simple country molecular biologist, but it seems to me that the "worst case scenario" for finding life on other planets or moons in the solar system would be to find microorganisms that are very similar to known earth ones. Then we may never know whether they have a common origin with earth organisms. or if it's just a case a contamination. This may be a greater concern with Mars than with Europa, inasmuch as Mars has had numerous probes sent there already. However, Europa seems to me to be a more hospitable environment for earth-like organisms (cf. Lake Vostok) so it may be a concern for future exobiologists if we start dropping probes on Europa without ensuring proper decontamination.

Most science, except perhaps math, is inductive or bottom-up. Evidence is gathered, a hypothesis made and tested; the best are promoted to theories like gravity or evolution. At any time however, a theory can be overturned with new evidence, which isn't the case with deduction.

I think your sentence would be better served citing inductive logic. Just my 2 cents.

Oh criminy, that's an error. Thanks for the eagle-eye. Fixed!

I love the warning at the end of 2010, and how it mixed technology with an obvious Biblical reference. Fascinating. I'm not a scientist (though I'm a science geek groupie), so I'm really looking forward to The Europa Report, scientific warts and all!!

Hi Claire,
I love these musings, but let me up Ken's two-penny ante to a nickle...
You were right to point out the use of deductive reasoning in the scientific method, just as Ken was right to want inductive reasoning to be included; but don't let him occlude deduction!
Sure, we make observations and gather information (an induction of data) to make our hypothesis, but a hypothesis is the deduction we then wish to prove. Finding evidence for a hypothesis is the definition of deductive reasoning.
Guess all's I'm sayin is that the scientific method thrives on the interplay of these two directions of reason. Using one exclusively over the other can lead to faulty logic.

The situation may be much more serious than we can now assume. Here, for example, in the bio-Foksha under the ice of the inhabitants of Europe: http://spacenoology.agro.name/?page_id=5640&cpage=5

Finding that life exists under the ice in Antarctica is not the same as finding that life had EMERGED under those conditions. Likely, it migrated there long ago. I don't know how we can use that knowledge to extrapolate about life which might have emerged under similar conditions - as on Europa.

This is indeed fascinating. But I have ONE huge problem with the Lake Vostok/Europa hype: The life inside LV may be old and weird, but it's definitely earth life. It's based on DNA and you can categorize it, find its relatives and so on. Meaning that LV was once injected with life from the outside which somehow adapted and survived when trapped.

On Europa, it would have to develop down there. There is no injection possible since the surface is a frozen, irradiated wasteland.

That's my big IF when it comes to draw parallels there. It's not 'can it survive', it's 'can it develop from scratch' under such circumstances.