Over at Scientific American's Frontiers for Young Minds blog, they have a great post on what happens when you ask scientists to explain key elements of a different research field. It's pretty funny, and rings very true, as SteelyKid asks me tons of science questions, very few of which have anything to do with atomic, molecular, or optical physics. so I spend a lot of time faking my way through really basic explanations of other fields.

Of course, even pitching stuff from my own field at the right level for small kids is a challenge. Which reminds me, I never did explain my presentation for the young kids at the Renaissance Weekend, and I probably ought to say something about that.

When I signed up to do stuff there, I said I'd be happy to talk to kids about science, not entirely realizing what level I was getting myself in for. they put me down to do "What Every Dog should Know About Quantum Physics" for their "camp" program, which turns out to be ages 6-12. And I had half an hour, instead of the usual hour. Which presented what you might call a formidable challenge...

I decided to try for something at least somewhat active, rather than just PowerPointing at them. Since the goal was to get a little sense of the weird-and-cool part of quantum physics, I opted to try to explain particle-wave duality via the double-slit experiment.

The wave part is easy-- I carry a green laser pointer in my laptop bag basically all the time, and I borrowed a couple of double-slit slides from the teaching labs, one to pass around, and one to shine the laser through. Laser pointers in general are endlessly fascinating to little kids, and seeing it go through slits and make lots of spots is way cool.

How to do the particle half, though? Well, I remembered a public talk I saw at the Perimeter Institute ages and ages ago where one of their outreach folks gave a talk on quantum, and talked about doing the double-slit with progressively smaller things. At one stage, he was imagining doing it with grains of sand, and passed a pinch of sand to people in the front row, "In case you need to remind yourself how big a grain of sand is..."

So, I latched onto that, and produced this: 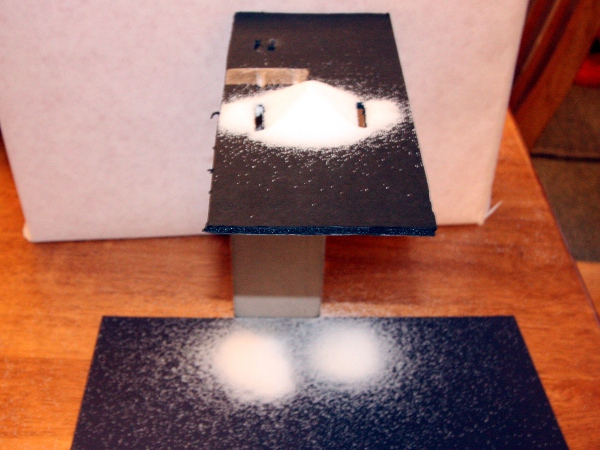 That's a double-slit experiment done with particles that are small, but undeniably classical particles. For this test at home, I used table salt; at the actual event, I used colored sugar. I cut a couple of slits in a piece of cardboard, propped it up on a stand (actually the box for my laser pointer), and poured particles through. You can see a big pile on the top, because only a fraction of the particles made it through the slits, and two distinct piles down below. Which is exactly what you expect for classical particles that have to go through either one slit or the other.

So, I had live demos for both particle and wave behaviors, and could then go to Hitachi's awesome single-electron interference video to show the quantum version. Which I think works to make the key point: when you get down to really small things, the rules change, and you get the weird quantum case, that's both particle-like and wave-like at the same time.

How did it work in practice? Kind of a mixed bag.

For one thing, I had somewhat overestimated the audience-- the median age of the kids was probably eight. The handful of slightly older kids were duly impressed, but the younger ones mostly just wanted to eat the colored sugar. I also had had to remove most of the dog material, which was a mistake-- if I ever need to do this again, I'll lead into it with some additional cute-dog photos.

I'm not quite sure how I would end up needing to do this again, but I'd be willing to give it another shot, so if you'd like me to talk quantum physics to second-graders, drop me a line. But really, if I go to Charleston again and find myself speaking to the campers, I'll probably stick with the classical physics of sports equipment...

(Completely independent of this, I do have an idea for a way to introduce quantum physics to the picture-book set, which I'd be happy to talk about to anybody who might have the art skills to help make such a thing...)

So have I understood you right: an individual snowflake is transparent, but a big mass of them scatter light and look white. But when one snowflake lands on my coat, it looks white. And for that matter the snowflakes falling through the air look white too.

It's a good question, though; I put the answer on the right post.

Has anyone ever really checked that particles like this won't produce interference patterns? It sounds like the dumbest suggestion in the universe, but I'm in a QM type of mood.

Maybe vary the inter-slit distance, vibrate the lower board possibly. I think particle bounce would be the biggest problem.

Vibrating the lower board might give you a periodic pattern via something like a Chladni plate, but that wouldn't be an interference effect. There was a bunch of buzz a while ago about a way to generate quantum effects with oil droplets on vibrating surfaces, but I'm not sure that would be the kind of thing you're interested in.