Once again, I've let a very long time pass without posting photos. It's been a crazy stretch for us, starting with SteelyKid getting yet another case of strep throat, then DAMOP, then a trip to my parents' for Memorial Day weekend, then trying to recover from the previous. As with the last few, I'l group these into themed collections, this one devoted to the kids and my parents' dog. We'll do this in order from oldest to youngest, so:

Bodie is a good dog. He has TWO sticks.

Fun fact: my parents' yellow lab, Bodie, was born within a day of SteelyKid. I think he's actually one day older, thus he gets pride of place. And even if I have his birthday wrong, he's a very good dog who retrieved both of these sticks. 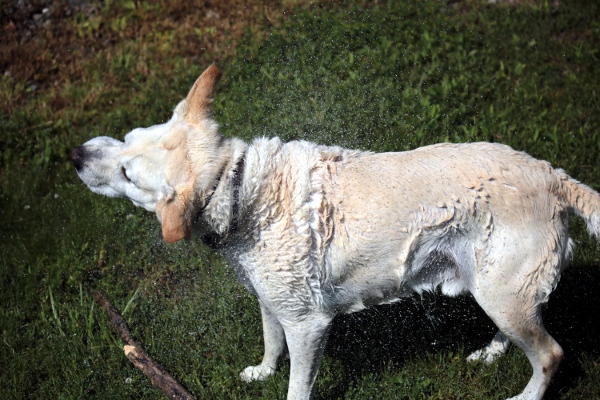 Important to shake off after a swim.

You can't have a camera and a dog in a lake without taking a photo of the shake afterwards. 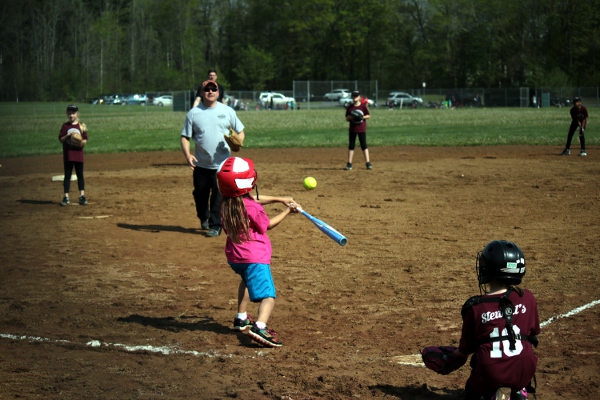 SteelyKid getting a hit.

We've seen a lot of softball in recent weeks, and I amuse myself during the games by trying to get good photos of the action. This one of SteelyKid at the bat came out pretty well (I butted the lens up against a hole in the backstop; I'm not dumb enough to stand right behind home plate with my expensive camera). 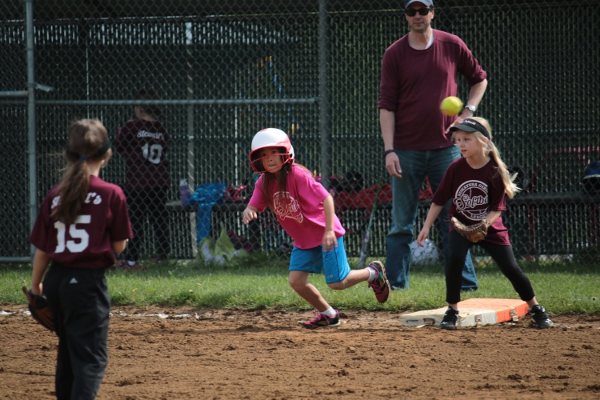 SteelyKid running as the ball is hit.

Again, amusing myself with the telephoto lens from the third-base line.

They also serve who only stand and wait.

Softball isn't all exciting action, though.

I'm sure this is totally safe.

Never underestimate the ingenuity of seven-year-olds when it comes to finding off-label uses for playground equipment.

SteelyKid (in blue) waiting for her match at the taekwondo tournament.

This past Saturday was a tremendously busy day, with a softball game in the morning, then a taekwondo tournament (SteelyKid won a bout (her first win!) against a friend from her school, in sudden-death overtime, then lost to a girl who was four years older and two belts higher to end up with another silver medal), then a birthday party. It's tough to say which was the most difficult-- SteelyKid tensing up at the bat (they just added strikeouts to the games), SteelyKid getting kicked in the face, or all the sitting and waiting for her turn to fight. 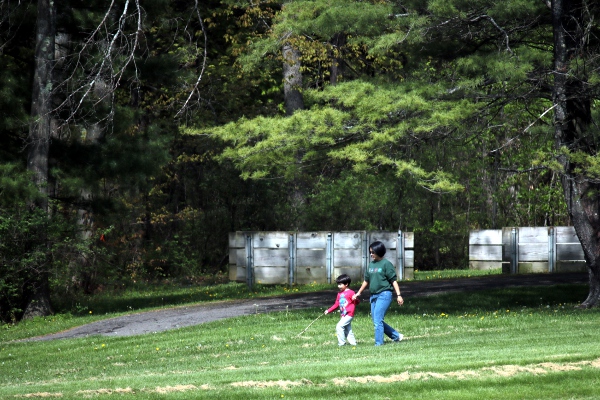 Kate and The Pip enjoying the outdoors during a softball game.

Softball is sometimes a little slow for the seven-year-old attention span, which means that to a four-year-old it's basically like watching glaciation. There is a playground in the same park as the softball field, but sometimes you just need to go for a walk, as you see here. Or you can sit down under a tree and try to count to 1000 (he got to 708 before the game ended).

No web of ropes can stop The Pip.

The Pip shows off his punching.

The Little Dude is doing "Little Dragons" taekwondo classes at day care, which is kind of like superhero training. Here, he shows off his skills next to a chalk drawing by SteelyKid and Grandpa, which Il Duderino has helpfully labelled "BATMAN."

It's hard work being The Pip.

Shhh! He's sleeping. Tiptoe out quietly, and there will be another photo dump in a bit...